8 Yuri Manga to make you lose your footing | Mondo manga 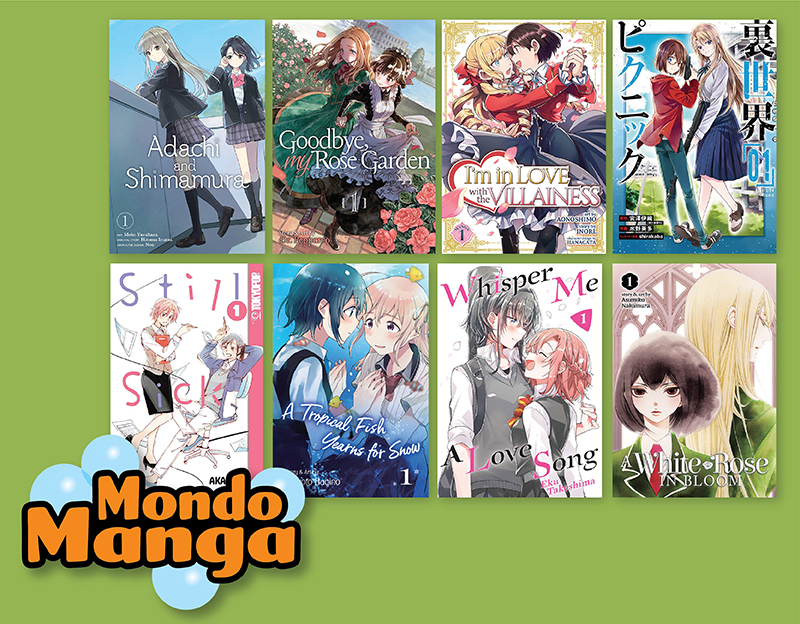 This category of manga focuses on relationships between two women or girls, usually romances.

The Yuri manga was hard to come by just five years ago, but it’s a rapidly growing niche. This category of manga focuses on the intimate relationships between two women or girls, usually romances. Beyond that, it’s a very broad category, encompassing a wide variety of character relationships, from schoolgirl crushes to intense adult experiences. While school and workplace romance is the most common genre, there are action, sci-fi, and isekai yuri manga as well.

While its roots can be found in early 20th century novels, the current wave of yuri began in the late 1990s with manga and anime. Sailor Moon, in which Sailor Uranus and Sailor Neptune are a couple (although the first English-language anime described them as “cousins”). The first yuri magazines in Japan appeared in 2003, the same year that the American company ALC Publishing published its first anthology of locally translated and cultivated yuri, Yuri Monogatari, and the yuri doujinshi (fan comic) Ricca ‘tte Kanji !? Seven Seas began publishing yuri manga in the mid-2000s, but the other major manga publishers (Viz, Yen Press, Kodansha Comics, and Tokyopop) have all started publishing yuri within the past five years as well.

As with other types of manga, yuri is often available in different media including manga, light novels, anime, and video games. The Okazu website is a useful resource for finding reviews and news on Yuri manga, anime, and novels, both in Japanese and English. The site is maintained by Erica Friedman, who started ALC Publishing and is the author of By your side: the first 100 years of Yuri Manga & Anime, to be published by Journey Press in June 2022.

Below is a selection of new and upcoming Yuri manga.

Gr 8 Up — Adachi and Shimamura start hanging out because they both prefer to play ping pong in the gym rather than go to class. Eventually, they start going to class again, but the friendship continues – awkwardly, in spurts, as they both wonder what’s really going on and if the other has the same feelings. It’s a slow-burning story with a lot of inner dialogue, and the issues the two girls have, such as social anxiety, will be linked to many teenagers. This manga is based on a series of licensed Seven Seas light novels, and there is also an anime. (3 volumes, in progress)

Gr 8 Up — This three-volume romance is a visual treat for fans of Victorian England. Young and idealistic Hanako, recently arrived in England from Japan, is going to work for noble Lady Alice as a maid, but one of Alice’s first requests is that Hanako kill her and pass it off as a accident. The reason: Alice prefers women to men and has given up on finding happiness and fulfilling family duties. We’ve known from the start that Hanako is going to change his mind, but the story has intrigue, deception, and suspense, all set against beautifully detailed Victorian settings. (3 volumes, complete)

Gr 8 Up — Isekai meets yuri in this story of a young woman, Rae, who is reborn in her favorite otome game, a dating simulation game where the goal is to win over one of the leading men. The point is, Rae only has eyes for Claire, the villain whose role in the game is to intimidate the player. So, what Rae likes the most is when Claire torments her. Eventually, Rae gets a job as Claire’s maid so she can be even closer to her, including when Claire is dressing and bathing. Rae’s enthusiasm for humiliation at Claire’s hands is a bit of a stretch, but it’s largely a game of laughter. The story is based on a series of light novels, which was also licensed by Seven Seas. (1 volume, in progress)

Gr 11 Up — Romance takes precedence over danger in this series, but it’s definitely there, albeit strictly as romantic tension in the first volume. Sarawo, a lonely college student suffering from social anxiety, accidentally discovers a sort of parallel universe, which she calls “the Other Side,” and she almost gets stuck there after being paralyzed by the sight of a strange being and supernatural. She is saved by Toriko, a beautiful gunwoman, and together they explore this strange land while searching for Toriko’s missing friend, Satsuki, of whom Sarawo is jealous. This manga is adapted from a series of light novels (licensed in English by J-Novel Club) and has also been adapted into an anime. (1 volume, in progress)

Gr 8 Up — Shimizu is an engineer for a large company, and she tries to keep her hobby, drawing yuri doujinshi, on the low-low. When her colleague Maekawa finds out, she teases Shimizu, but then shows interest and reveals that she too was a manga artist but quit when she hit a creative block. Shimizu tries to support Maekawa as she returns to drawing, but the two women have to go through a lot before they can come to terms with who they are and how they feel about each other. Workplace romance is a common yuri plot, and it’s fun to watch Shimizu successfully manage a team of engineers as Maekawa grapples with his own creative issues as well as the behind-the-scenes drama of the manga biz. (3 volumes, complete)

Gr 8 Up — Sent to a new high school while her father works overseas, Konatsu worries that she won’t make friends. Before school even starts, however, she browses an aquarium exhibit and meets Koyuki, the only aquarium club member and avid fish (and amphibian and reptile) enthusiast. The two quickly hit it off, but they have a lot of soul searching to do before they can admit their true feelings. Hagino uses fish and other animals not only as part of the set, but also as metaphors, integrating them seamlessly into the plot. (9 volumes, completed in Japan; 7 volumes currently on sale in North America)

Gr 8 Up — On the first day of high school, Himari sees Yori singing in a band and feels an instant connection with her. When Himari tells Yori that it was “love at first sight”, she means that she liked Yori’s singing. But Yori takes it as a confession of love and is immediately seduced by the younger student. They resolve the misunderstanding, but Yori is still determined to make Himari fall in love with her, and they remain friends while Himari settles her feelings. The story is told by alternating the points of view of the characters. While there are hints of jealousy here and there, it’s kind of a mellow, innocent kind of romance, with a lot of friends reassuring themselves and stating how cute everyone is. However, a new rival appears on the last page of the third volume, so the super cute romance can head to choppy waters. (3 volumes, in progress)

Gr 8 Up — Most yuri schoolgirl romances have a similar look to the shoujo manga, with cute, rounded characters and lots of detail filling the panels (flowers, screentones, side comments, etc.). hand, has a classic look, reminiscent of Heart of Thomas and other early shoujo manga. The story has a sense of calm, with a pace that is not so slow as it is deliberate. It follows the relationship between two girls in an elite European boarding school; Steph is a mysterious and taciturn refugee, and Ruby is a more outgoing teenager who faces family issues. When the two are stuck alone at school over Christmas, Steph lets his guard down, but after the holidays rumors and jealousy quickly drive a wedge between them. (1 volume, in progress)