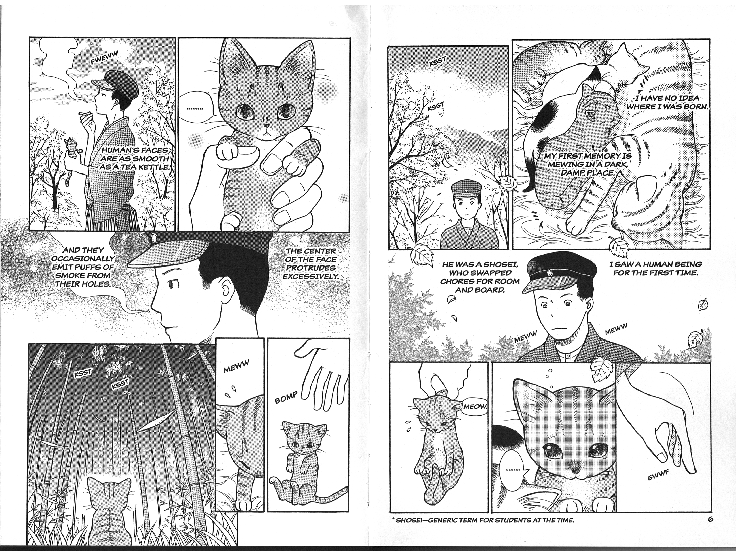 The famous Japanese novelist Sōseki Natsume (1867-1916) achieved instant success with his first novel, Wagahai wa Nekodearu (I am a cat), which was serialized from 1905-1906. It remains one of his best-known works. The new translation of Chiroru Kobato SI Am a Cat by ōseki Natsume: The Manga Editionthus imposes itself as a natural place where beginners can learn about the work of Sōseki.

The Kobato adaptation was originally released in 2010 as one of the titles of Dokuha manga (“Reading Through with Manga”), a commercially successful series of manga versions of classic literature designed for reluctant readers. the Dokuha manga The series released 139 titles over 10 years, including adaptations of six of Sōseki’s novels.

Unfortunately, it would be difficult to imagine just reading this adaptation how I am a cat had earned its reputation as a biting, sardonic and cynical literary masterpiece. The main strength of the novel, the cat’s running commentary on events in a professor’s house, is largely reduced to make room for the story the cat had commented on, and this rambling story does not represent much.

Sōseki’s I am a cat begins with the first memory of the cat-narrator: he is lifted into the palm of a student’s hand; he chokes on the tobacco smoke that the student exhales; then the student carelessly dumps the cat (just a kitten at the time) and the kitten wakes up abandoned and alone, no longer in sight of its mother and brothers, whom it will never see again. (The unnamed student also disappears from the story at this point.)

These first three paragraphs of the novel are the basis for the first four pages of Chiroru Kobato’s manga adaptation. In the manga, the cat is drawn as an irresistibly adorable kitten; the pupil raises it; exhales a little smoke but not in the kitten’s face; then gently drop the kitten to the floor. On the next page of the manga, the cat realizes that he is alone, abandoned, and hungry (but not, as in the novel, in pain and fearing starvation.)

All the sentimental changes aren’t enough to make this manga truly kid-friendly, as kids might find the rambling, unromantic main plot (which involves arranging a wedding for an industrialist’s daughter) confusing and irrelevant. The part a younger reader might find easier to understand might be how the manga (and the novel) strongly endorses the idea of ​​thinking badly of a person because they have a big, ugly nose.

Aspects of Sōseki’s life and career that are of interest to his biographers have been the ways in which his life parallels that of some of his characters (in this story, both the unloved cat and the “Sensei” whom the cat observes); The perspective of Sōseki as a product of the rapidly changing Meiji period; and (so the translators say) the stylistic brilliance he achieved as a scholar trained in Chinese, Japanese, and English literary classics, but with an ear for popular Japanese comic slang.

Although intended as a kind of “Classics Illustrated” educational project, the peculiarities of this manga edition of I am a cat don’t include much historical context about Sōseki’s life or novel. These features include a two-page “Character Overview” briefly describing six people and three cats who have roles in this story; a table of contents; a 125-word summary of the translator’s impressive credentials; a 120-word biographical sketch of the author Sōseki; a sadly uninformative 25-word paragraph about the artist who told and illustrated this story; and, finally, a page about the publisher, Tuttle Publishing.