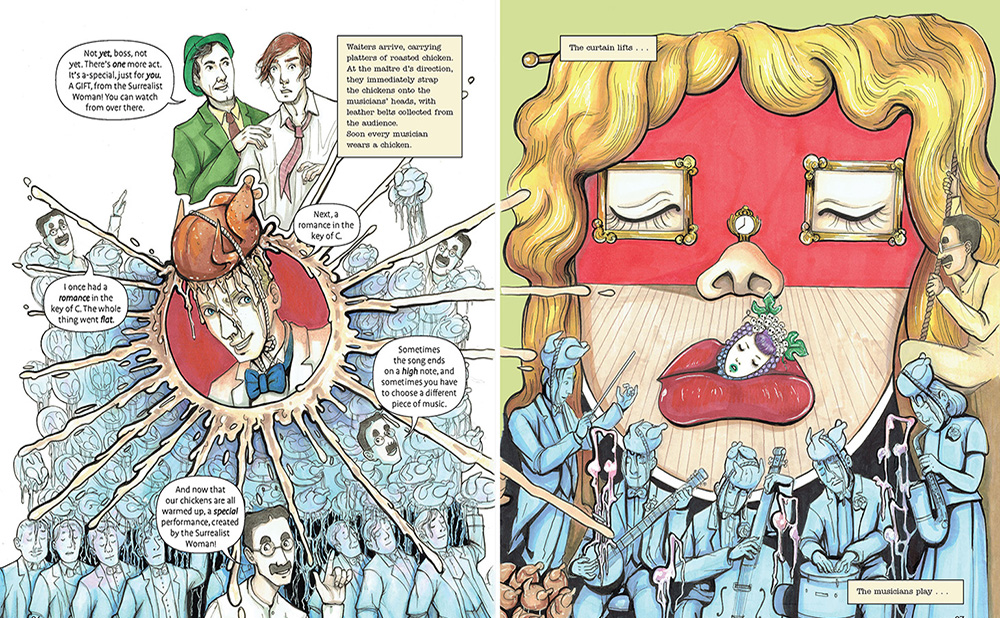 Explosive film projects that never see the light of day are enveloped in a mythical aura: a reinterpretation of Superman by Tim Burton, a science fiction epic by Stanley Kubrick and David Lynch Ronny rocket come to mind. Pop culture scholar Josh Frank, known for his books on Peter Ivers and the Pixies, attempted to shape the most surreal soaring that ever existed: a potential / eventual 1937 collaboration between Salvador DalÃ­ and the brothers Marx, titled Giraffes on Horse Salad, Where The surrealist woman.

It was never produced because if Harpo Marx liked the script, the other brothers and MGM leaders would have hated it. None of this mattered to DalÃ­. It felt good to just put a script there. From then on, throughout his life, he worked with Hitchcock and Walt Disney, whom he considered “the second American surrealist”.

The book is partly an illustrated story, partly a comic strip, not to be taken lightly due to the user-friendly format made possible by the illustrations by Manuela Pertega and those by Tim Heidecker (from Tim and Eric notoriety) participation in the writing project. DalÃ­’s writing for Harper’s Bazaar in 1937, the subject prompted Frank to frantically search for the original source material, which led him to contact the Gala Foundation – Salvador DalÃ­. He discovered two leads: the only surviving copies of the film project (visual ideas, screenplay, character sketches) were an abridged Portuguese translation contained in an out of print catalog of DalÃ­’s film projects and a more comprehensive document, an edited notebook. in French hosted at the Center Pompidou. While waiting for these materials to arrive, Frank delved into everything he could find written on the history of cinema and also on DalÃ­. â€œI was beginning to understand the backbone of the film, the recurring themes and, most importantly, the seemingly unrelated episodes that formed a cohesive narrative arc,â€ he writes with wide-eyed wonder in the introduction. “Basically, to put it in modern ‘superhero’ terms, this was an origin story.”

A sense of wonder lingers throughout the book. The introduction to the graphic novel is a children’s book-like narrative – that is, thin blocks of text with elaborate illustrations adorning the margins or the bottom half of a page – detailing how Dali came to be. America and became friends with Harpo Marx. This affinity with children’s books is limited to the format. The sepia-toned illustrations are decidedly mature, with depictions of Harpo Marx lying down, like a Roman god, stroking a swan and wearing a crown of roses, and the texts are teeming with surreal anecdotes. One of them stands out: DalÃ­ kicks a cart carrying a legless man across the street and comes to the conclusion that Parisian society is doomed and it is time to him to move to America.

The graphic novel section is the visual representation of fragments, summaries and annotations that make up DalÃ­’s script for Giraffes in salad on horseback. The only compelling element of the so-called plot involves a Spanish transplant in New York named “Jimmy” (played by Harpo Marx) who is torn between his typical, shallow 1930s fiancÃ©e, Linda, and the so-called surrealist woman, a mysterious figure who has a sublime, almost frightening beauty, whose entire face the public never sees.

The pages illustrated by the Spanish artist Manuela Pertega are, for lack of a better term, worthy of a frame. She abandons the grid format that characterizes direct narrative sequences in favor of pages designed to express the surrealist woman’s evocation of surrealist fantasies. Well-placed arabesques and serpentine patterns convey the soaring imaginations of the characters as they interact with the surrealist woman, these pages resemble a maximalist hybrid of DalÃ­’s style, art nouveau and works of art. ethereal by artist Yoshitaka Amano. Said visuals, which alternate between black and white for segments of everyday life, and saturated colors representing everything about the surreal woman, almost have the ability to negate the need for blocks of text entirely.

Even though writers Frank and Heidecker are witty and irreverent while making sense of both DalÃ­’s worldview and the Marx Brothers’ dynamic, their text interrupts, almost disrupts the sheer beauty of Manuela’s work. Pertega. What is written on the page, in all its wacky, vaudevillian splendor, can be quite overwhelming for the reader making the choice, as their eyes focus on the text or image or design, delicate and exciting. The reading of graphic novels allows a fluid back and forth in the reading of the text and the image. In this case, the text comes close to a default mechanism to rely on to try and make sense of the surreal illustrations. This is not a denigration of the value of the book, but a reflection on the limits of a still image for a project of this scope. We can and can hope that soon enough an animation studio will take care of that and bring both the script and the visuals to life.

Giraffe salad on horseback: Salvador Dali, the Marx brothers and the strangest movie ever made by Josh Frank, Tim Heidecker and Manuela Pertega is published by Bizarre books; First edition (March 19, 2019) and is available from Amazon and other online retailers.

Coralina Rodriguez Meyer invites women to reconnect with the indigenous and syncretic spiritualities of their ancestors to find new power.

A young black gay man from the southern United States, Kelly was a determined, self-taught innovator who worked his way to the highest levels of international fashion.

Stephen Raw, the 69-year-old artist behind the project, has been photographing and collecting rusty objects since the age of 17.

Researchers and artists are working to restore biodiversity in Kofele, Ethiopia, with a 50-meter lion-shaped nursery that will be visible from space.