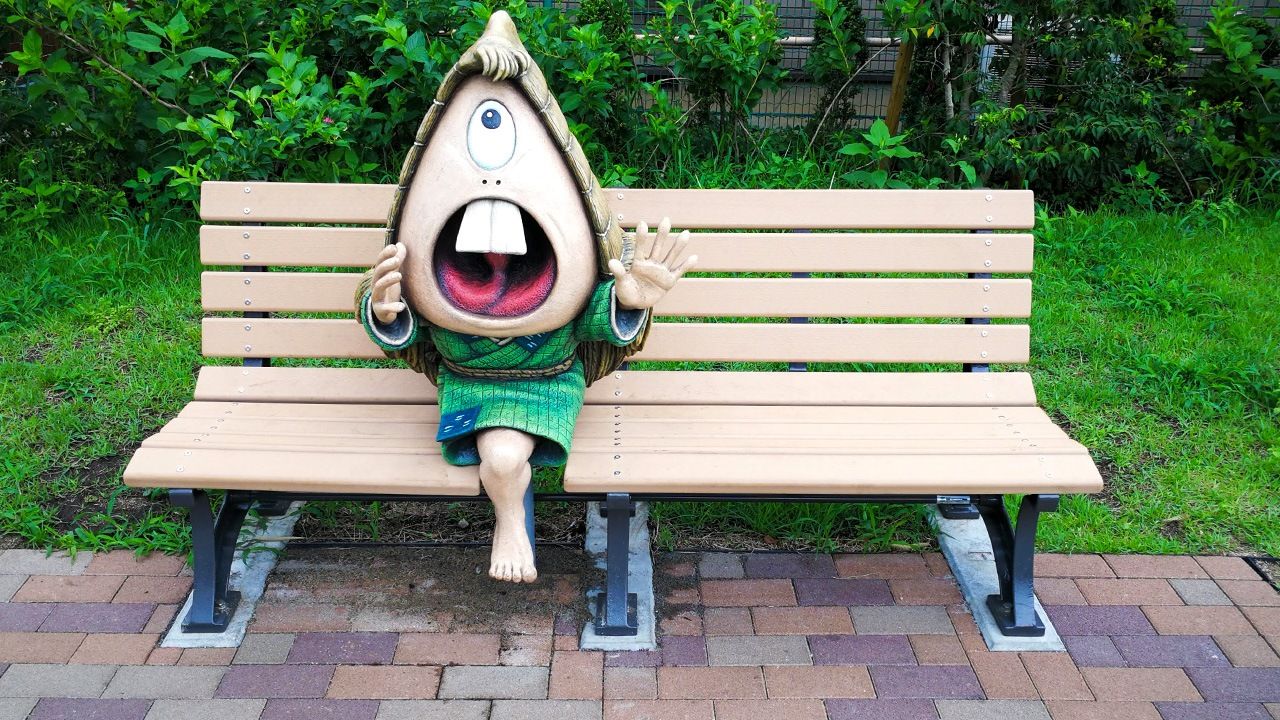 Mizuki Shigeru, born 100 years ago, spent most of his life in Chōfu, a western suburb of Tokyo, where he created his most famous manga story, Ge Ge Ge no Kitaro. A walk around Chōfu reminds us of Mizuki’s deep love for nature and youkai spirits.

A storyteller finds his place in western Tokyo

Mizuki Shigeru (1922ｰ2015) is one of Japan’s most famous and respected manga artists. While he is best known for Ge Ge Ge no Kitaro and other youkai-themed comics, he also published works on world and Japanese history, often with autobiographical elements.

Born and raised in Sakaiminato, Tottori Prefecture, Mizuki moved to Chōfu in 1959, a year after debuting as a manga artist for the then-thriving kashihon (book rental). By this time, Chōfu had become one of Tokyo’s largest cities. Once a small rural town, it grew rapidly after the Great Kantō earthquake of 1923, when many people and businesses moved to the suburbs. Here, Mizuki found the perfect environment to create his stories.

The main theme of Ge Ge Ge no Kitaro and other youkai manga is about humanity’s need to co-exist with nature and the many creatures – natural and supernatural – that inhabit this world. Some of them may be invisible, but after all, people have always imagined things that are invisible to the senses. Mizuki used to say he noticed a disaster youkai decrease in crowded urban areas with little nature, where the five senses were overstimulated and people had lost their power of imagination. On the other hand, youkai tend to thrive in sparsely populated areas with lots of trees and water sources. This is why Mizuki loved Chōfu.

Today, it takes less than 20 minutes to reach Chōfu from Shinjuku Station via the Keiō Line express service. The colorful Kitarō bus has several routes departing from the station and can take you anywhere, but the best way to explore the city is on foot.

In any case, our first destination is very close to the station.

Mizuki-related sites on the north side of the station

Tenjin-dōri may at first look like a typical shopping street, but you soon discover that it is populated by statues of several characters from Mizuki’s bestseller Ge Ge Ge no Kitaro. Nezumiotoko (Rat Man) reclines on a bench, Nekomusume (Cat Girl) rides Ittan-momen (Roll of Cotton) atop a transformer box, and Kitarō greets shoppers and passers-by at the street entrance. They were installed in 1991 following a proposal by Mizuki himself, who apparently used to shop on this street. Even now it retains a laid back atmosphere. Not far from the street stands a nondescript building housing Mizuki Productions, the company that handles the artist’s huge creative output and plans new manga and anime projects.

Nezumiotoko relaxes on a bench.

At its northern end, Tenjin-dōri becomes the approach to Fuda Tenjin, a very ancient Shintō shrine surrounded by greenery believed to have been built in the first century AD, during the reign of Emperor Suinin. Surprisingly, such a quiet space is just a 5-minute walk from Chōfu Station. Besides being a famous point of power, Fuda Tenjin is popular among Kitarō fans as a seichi junrei, or otaku pilgrimage destination. According to youkai the original version of the saga, titled Hakaba Kitaro (Kitarō of the Graveyard), the small shrine grove is also where Kitarō is supposed to live.

The main hall of Fuda Tenjin.

After saying our prayers and buying a themed Kitarō omikuji (fortune-telling comics), we resume our walk north crossing the beautiful local river, the Nogawa, passing many rice fields, orchards and small shops along the way.

North of an ancient temple

After 15 minutes of walking, we arrive jindaiji, one of Tokyo’s best-known and most beautiful Buddhist temples. Founded in 733, it is also the second oldest in the capital, after Sensōji in the central district of Asakusa. The vast grounds of Jindaiji are home to several buildings, including structures relocated here from three major ancient temples from the Edo period (1603-1868), as well as a Buddha statue from the late Asuka period (593-710) .

Among the temple’s many attractions are an expansive botanical garden just up the hill and a morbidly cute pet cemetery, as well as a tree-shaded street lined with restaurants serving soba, a local specialty. But manga fans will probably prefer to check out the Kitaro Chaya, a quaint cafe and souvenir shop that best illustrate how Buddhist temples in Japan are often a mix of the sacred and the secular. The retro wooden structure is over 50 years old and is one of the first things one encounters when walking up the path to the temple’s main gate. Here you can enjoy the fantastic world of Mizuki in all its aspects. The cafe has a nostalgic atmosphere reminiscent of Shōwa (1926–89) Japan. Here you can buy youkai– themed produce and sample its ghostly menu which includes delicacies such as Medamaoyaji Chestnut (Daddy Eyeball) zenzai (made by boiling kidney beans in sugar) and Nurikabe miso (Wally Wall) Oden: a slab of konnyaku (konjac) dipped in a sweet miso sauce. There is also a gallery where precious illustrations by Mizuki are exhibited.

Mizuki used to come to Jindaiji to commune with animals, birds, Buddhist deities, and even his beloved youkai. Surrounded by the splendid ancient forest of Jindaiji, one is touched by the power and warmth of nature. Look around and you might even see Kitarō peering out from behind one of the trees.

Those who want to experience more of Mizuki’s world should now retrace their steps and return to the station. A recent addition to Chōfu youkai the landscape is Kitaro Hiroba (Kitaro Square). Opened in 2019 on a site between Chōfu and Nishi-Chōfu stations along the Keio line, occupying a plot of land vacated when the tracks were buried on this stretch of track, this playground is equipped with youkai and character statues and play equipment for young children, including Kitarō’s house, with a slide, and the . The square and its equipment were created and are currently maintained thanks to donations from people through crowdfunding.

the Kappa no Sanpei Pond (not a real pond, unfortunately) was added this year to celebrate the sixtieth anniversary of the original publication of another Mizuki story. Kappa no Sanpei is a manga about a boy called Sanpei who looks like a kappamischievous water youkai. One day, Sanpei meets a real kappa and is introduced to his mythological world. Portrait of an idyllic world where humans, animals and youkai peacefully coexisting, living together in the mountains, this comic is considered one of Mizuki’s masterpieces.

Pay a visit to Mizuki’s grave

Our Mizuki-themed walk around Chōfu ends at Kakushoji, a temple belonging to the Jōdo Shinshū sect. Here we find Mizuki’s grave. Kakushōji is an offshoot of Edo-Asakusa Gobō, a temple that was built in Asakusa during the Edo period but burned down in a citywide fire in 1657 before being renamed Honganji and moved by the shogunate on reclaimed land in the Tsukiji district. Even Kakushōji was originally located in another district of Chōfu, but in 1944 the military authorities, planning to build an airfield in the area, ordered its forced removal to its present site with two adjacent temples, Chōsenji and Kōgakuji. The current main hall was built in 2001, while the adjacent guest hall was built in 2007.

Mizuki’s grave is easily found among the sea of ​​flat, gray tombstones as it is guarded on either side by statues of Kitarō and Nezumiotoko. The tombstone itself is engraved with the words “Namu Amida Butsu” which can be translated as “Save me, Amida Buddha”. After youkai adorn the low stone fence surrounding the tomb on three sides. We recognize Nekomusume and other popular characters.

Both cute and terrifying, Mizuki’s tomb is constantly cluttered with a vast array of gifts (the standard flowers, plus plenty of candy, snacks, and even soft drinks and canned beer) left behind by the many fans who come to visit from all over the world. country.

Mizuki’s grave on the temple grounds at Kakushōji.

The tomb was actually built in 1987, when Mizuki was still in his 60s. According to the chief priest of Kakushōji, the artist was planning at the time to visit Papua New Guinea, where he had nearly died during World War II and where he had befriended the local people. Mizuki wanted to research spiritual beliefs there; his wife, Nunoe, was worried about his health and suggested he have a tombstone made, just in case.

Although Mizuki’s family belonged to the Sōtō school of Buddhism, he chose Kakushōji as his final resting place. He often came to the temple after taking his daily walk because he liked its atmosphere. The main hall is next to a thick tree, and you have to go down a narrow passage to reach the cemetery at the back of the temple. Here Mizuki probably felt the friendly presence of his beloved youkai.