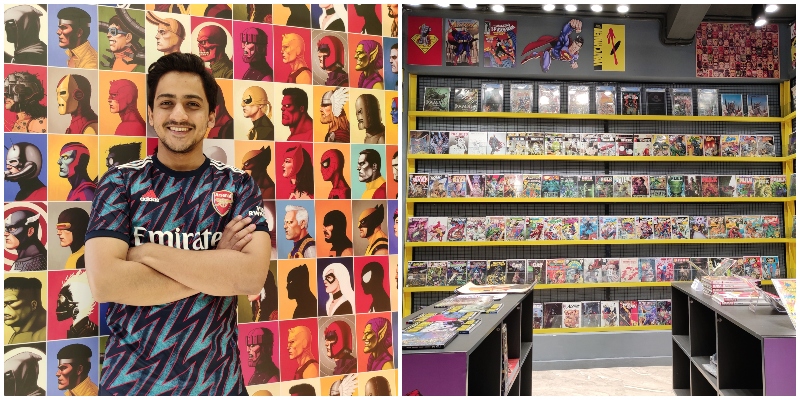 Comics have existed in India since the days of Indian independence. The comics industry is a big niche industry all over the world, but it is more popular outside of India, especially in the US, Japan, Canada, UK, and elsewhere. Although India also has a plethora of comics, the youth are more interested in international comics based on superheroes belonging to the universe of Marvel and DC and manga.

Turning to the topic of international comics, most of you must have seen Stuart’s Classic Comics Store at The Big Bang Theory and would have wondered when such a comic store will open in India where you can go with other comic lovers and debate on which issue or character is the best or just for fun. To end your wait, Hamza Sayed has opened the first licensed comic book store in India called The Comic Book Store in Bandra West, Mumbai. Although the store was launched in India three years ago as an online business to cater to the needs of Indian customers and fanbase, Sayed felt that it should also make a change offline while continuing its activities online.

Animation Xpress had the chance to visit the store where we met the founder (Sayed) who said, “I wasn’t inspired to start this business by anyone or any show; it’s something I’ve always wanted to accomplish for a long time. The comic book store is built on his vision that comic book stores should only be there for comics and not for merchandise.

Coming from a social media and marketing background, Sayed’s passion for comics is what drove him to quit his traditional job and pursue his passion and open this store. He said that as a child he wanted to read comic novels, but they were not available in India. Sayed views comics as single-issue books, which he currently offers on his website and store, rather than graphic novels.

The comics that Sayed sells in his store and on the website come directly from publishers like Marvel, DC and others. Besides Marvel and DC, The Comic Book Store carries a range of comics from other publishers such as Image, IW, AfterShock, Vault, manga and others. The store has a 10% stock of manga, which they would like to increase to around 40% in the near future.

Speaking of bestsellers, he highlighted the fact that manga, Batman, and Avengers-based comics like Captain America, Thor, Hulk, Deadpool, and Iron Man are bestsellers.

While discussing the marketing strategy, Sayed shared, “We don’t need a marketing strategy and we don’t spend anything on it because this activity doesn’t require constant reminders. People who still read comics will keep coming back. Sayed believes comics have a cult following, so marketing isn’t necessary to promote his business, and he’s proud to be a part of that cult. Another reason he doesn’t need a marketing strategy for this business is because he feels word of mouth is enough. Also, when people visit the store, they post stories on their social media and from their posts, it reaches more people and that’s how her store gets promoted organically.

To add an element of fun and craziness, The Comic Book Store also occasionally runs contests. Recently, when the release of Doctor Strange: Multiverse of Madness, they held a contest in which the lucky winner received two tickets to the film. They have other events and contests planned like cosplay, mystery boxes, signature events and much more.

Not wishing to sell any merchandise, Sayed mentioned that although he has US imported t-shirts in the store, he does not plan to keep and manufacture any merchandise. The comic book store houses hard-to-find collectibles and signed items and sometimes memorabilia is imported to order. Sayed insisted that he sells premium comics at non-premium prices in India, as well as some of the comics by legend Stan Lee himself.

It is a known fact that the comic industry is still a niche in India where there is a lack of awareness about it and opening a store is no small feat. Speaking about the challenges he faced, Sayed revealed, “It’s hard to explain to customers and it’s also a sad reality that they don’t know what a comic is. Some customers find it hard to know how much a thin comic can cost, and older editions of comics are much more expensive, so some are confused to know the value of a comic. In his opinion, collectors know the correct value of comics and collectibles, and they are willing to buy them at the price offered by Sayed’s store. Sayed explained that they opened The Comic Book Store to raise awareness of the beautiful art form of comic books which, in the future, can be sold for record prices.

While shedding light on the business model and expansion plans, Sayed claimed that they plan to expand through a franchise model across India. He said, “It can be opened in 30 days.” A franchisee then does not have to worry about acquiring the license because it takes a long time to get a license for a comic book store. He concluded by saying, “Franchisees will recoup their investment in 100 days and no other company can guarantee that!”