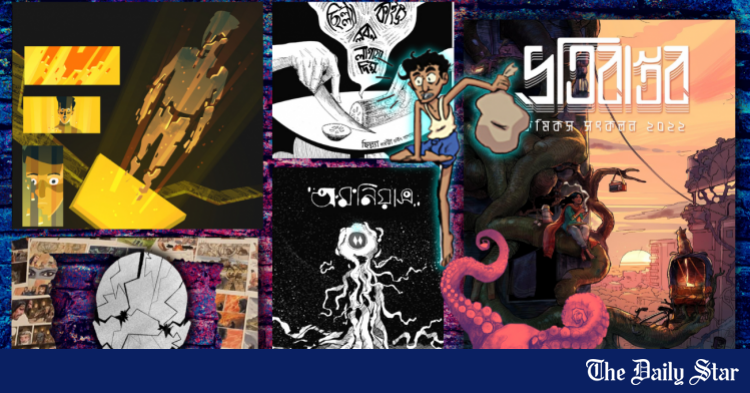 When I saw the first public announcement of Protibastob (Dhaka Comics, 2022) on social media, I immediately knew it was going to be something special. Immediately I did two things: I pre-ordered two copies and messaged the editor of Daily Star Books to call dibs to review it. Sarah Anjum Bari graciously accepted.

I received the package from Dhaka Comics a few weeks later. I unpacked it carefully and discovered, to my surprise, that it wasn’t just the book in the pack, with the title and cover drawn on it – there was also a set of fascinating character stickers and a book poster as well.

For all the latest news, follow the Daily Star’s Google News channel.

The book jacket depicts a post-apocalyptic world where nature has overtaken an urban city due to human neglect – with the sun on the horizon, a girl sits on a thick vine wrapped around the remains of what appears to be a large building. Next to her, a cat sits on the hood of a wheelless rickshaw. While the work fascinated me, I couldn’t help but notice that the title, Protibastob Comics Shongkolon 2022, was not properly aligned. I removed the dust jacket and found that the hard cover of the book was black and the name silver. Below was a silver silhouette of the “Futuristic Subodh” from the sticker set. I was looking forward to diving.

Protibastob is perhaps the first of its kind in the country – the largest anthology of original comics focused on super talented young artists. The 22 stories are written by popular and contemporary writers with big names such as Muhammed Zafar Iqbal, Ahsan Habib and Mehedi Haque. Their stories are fun to read, nine of which are written by the artists themselves. In terms of genre, they are pleasantly diverse, including sci-fi, horror, adventure, fantasy, etc., and most of them, regardless of genre, brought unexpected turns. at the end that I could not foresee. A few that I particularly liked were ‘Eka’, ‘Quarantined’, ‘Daini’, ‘Nishongota’ and ‘Kissa’.

The collection has a few feel-good stories that young children would really enjoy – one called ‘Summer’, which is about a cat who feels unloved by its owners; “Harano Ebong Pawa”, about a little girl who always mysteriously loses her belongings; “Krakra”, about a young crow ridiculed for his “sweet” voice; and a few others. However, since many of the other stories have dark undertones and violence, including elements of mass murder and body horror, and sci-fi and horror stories where monsters have the last word, I would not recommend this book to readers below. their teenage years.

Each of the 22 artists in the book shines in their own unique colors (pun unintentionally, with 19 of the stories drawn in black and white). Intricate background details of futuristic worlds, manga look and feel, well drawn body horror elements, minimalist art – this book has it all!

Going from story to story with a completely different art style is something that I enjoyed immensely because there was always something new. I found the dynamic and “fast” art of “Chhut” delightful, as well as the perfectly detailed world of a post-apocalyptic era in “Eka”. The simplistic art of “Quarantined” and the innovative panels of “Oshombhob Chur” also caught my eye. This book can serve as an excellent case study for the country’s up-and-coming comic artists.

As bonus content, there is a very well researched and detailed article on the history and development of Bengali comics. Two interesting interviews are also included. One of Sankha Banerjee, the artist of The Mahabharata graphic novel, whose work I’ve always heard of but never had the opportunity to check out – which will change soon, thanks to the inclusion of his interview. The other is by Dave Gibbons, the artist of watchmenone of the best graphic novels ever made.

In his interview, Gibbons offers insight into the differences between the American and British comics industry – how in the UK comics were predominantly black and white, while the advent of colored comics in America was compared to color television. Moreover, I have always known (like many others) that the author of watchmenAlan Moore, didn’t like the film adaptation of the graphic novel – which I discovered wasn’t quite accurate.

Protibastob is a big step forward in the evolution of the comics industry in Bangladesh and I sincerely hope that Dhaka Comics will make this an annual publication where popular writers join forces with talented young artists to create something truly unique, fascinating and visually celebrating this engaging mode of storytelling.

Kaisar Kabir is a pop culture enthusiast and former radio show host who is currently making money in the content industry.