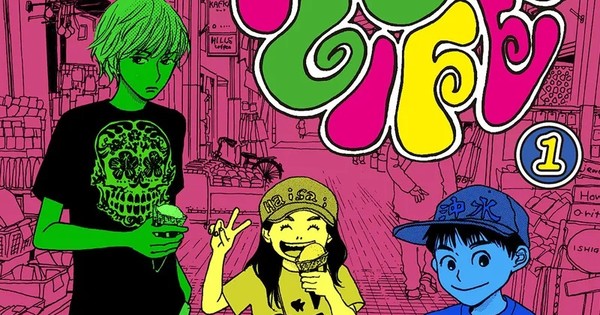 Title: Children of Mu-Town
Creator: Masumura JÅ«shichi
Release Date: September 23
Plot: Stylishly blending themes of gentrification and rebirth as part of a classic yakuza crime drama, Children of Mu-Town follows the course charted by the young people of an aging residential complex fighting for their lives: overwhelmed through financial woes, peer pressure, and uncertain futures, trapped in organized crime, they seek a way to survive. When a municipal renovation project seems to offer a future of stability to their dilapidated city, the mysterious and far-reaching consequences their actions have unleashed can leave Juichi and his friends with no other choice but annihilationâ€¦, Mu-Town is a tale of intimidation of small town gangs, escalating immigration tensions, political intrigue and the burning desperation of youth.

Title: Tsukiko and the satellite and other stories
Designer: MISSISSIPPI
Release Date: September 23
Summary: This is the first English collection of the Japanese painter and comic book designer based in Kyoto â€œMISSISSIPPIâ€. Five dreamlike sci-fi short stories that bring small moments of everyday life to life: a long-wandering father comes home; an unusual guest joins a woman during her evening “alone”; a bike repair job that’s more than it looks; a summer worker meets a mysterious girl; contemplative rumination after cleaning the aquarium. This collection includes works produced from 2014 to 2019: Tsukiko and the Satellite, Audrey Hepburn 2049, Supermoon, David, Down the Uji River, and has been published in close collaboration with the author. Note: The first chapter of this series is read right to left, like most manga. The rest of the chapters are left to right like most English comics.

Title: Ripples
Creator: Rei Hagiwara
Release Date: September 30
Summary: “One day, I would like to be able to come across the memories of certain people who exist in the abyss while contemplating their pain, their sorrow and the movements of their soul …” This dreamlike work focuses on memory and family, and follows ambiguous figures that roam the snowy lands adjacent to the realm of the dead. Hagiwara Rei explores the treatment of grief and how the cyclical mechanisms of human emotion trace a geography of memory inextricably linked to the natural world from which we come. Prepare to be absorbed into a work like no other that is coming out now.

Title: Pop-Life
Creator: Minami Q-ta
Release Date: September 23
Plot: Sakura and Akemi are two single mothers in their forties who have decided to start living together in order to help each other raise their children. Immerse yourself in their daily life and find out what it is like to live a humble yet peaceful life as a single parent in Japan.

Title: Ikyoudo
Creator: Kakio Tsurukawa
Release Date: September 23
Plot: Rokunosuke, the child of a poor farmer, leads a calm but impoverished life in the Edo period … which collapses when his family is condemned to pay cruelly high taxes. Rokunosuke vows revenge, but a hooded woman named Oyuki appears and warns him, “Only demons kill people.” Rokunosuke vows to live in peace once more, butâ€¦ Ikyoudo, a period sci-fi play about a man trying to avenge his father who was killed at the hands of a governor, has garnered over 100,000 likes when it was first posted on Twitter. This Complete Edition also includes the highly anticipated sequel, Ikyoudo II!

Title: One-shot “Sawanabe Zombie”
Creator: Kakio Tsurukawa
Release Date: October 7
Plot: After six months of surviving the zombie apocalypse, student Sawanabe finally gets bitten. However, with the transformation comes the unexpected surprise that the young man is still able to think like a human. Having to fight to survive, Sawanabe must balance his morality with his lust for human flesh.

Chapters Pop-Life, Children of Mu-Town, Tsukiko and the Satellite and other stories, and Ikyoudo are available on the service. The other manga will be launched in the coming weeks.

Azuki launched on June 28 for iOS, Android, and English web browsers worldwide except Japan. The service offers simulpub manga chapters shortly after their launch in Japan, in addition to a library of other titles. Azuki’s first partnership was with Kodansha United States, and the service offered titles from the publisher’s catalog at launch.

Free users can access certain chapters with advertisements. There is also a subscription available to customers for US $ 4.99 which allows subscribers to read manga ad-free. Comment threads are available on each chapter for discussion by registered users.