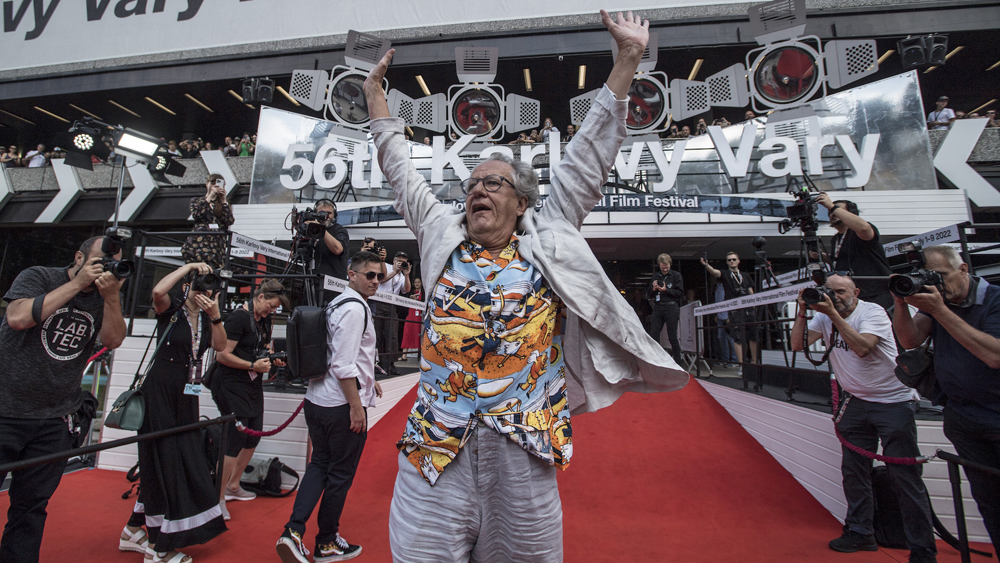 Speaking at the Karlovy Vary Film Festival, where he receives lifetime achievement awards, Australian actor Geoffrey Rush said the prospect of playing Groucho Marx in Oren Moverman’s ‘Raised Eyebrows’ is “scary “, but that he always enjoyed the challenge of complexity. characters.

It’s not a biopic, he says, of the film – still in development – adapted from the book “Raised Eyebrows: My Years Inside Groucho’s House” by Steve Stoliar, which focuses on the last days of the legendary comic. “I describe it as a tragicomedy about mortality,” he says. “He is between 83 and 86 years old, at the end of his life. There is dementia but you never know because with Groucho he would never let you know he was forgetting things.

Mastering the way Groucho Marx spoke is a challenge, admits Rush. “His dialogue is so hard to learn because it’s not sequential – you know how it forms freely. There’s this speech in ‘Animal Crackers’ where it’s been hanging around for ages, nonsense. Then he says, ” I told you what I know – now tell me what you know We’re not close to anything anymore.

But diving into seemingly unknowable roles is something Rush clearly enjoys, he says. “When I first came to Prague to do ‘Les Miserables’, I had never played a policeman. After ‘Shine’, I thought I didn’t want to do another piano film. Except I had to ride – never again.

But the challenge of inhabiting a character who seems unknowable is something Rush says he relishes, whether it’s Albert Einstein on the TV show “Genius,” Leon Trotsky on “Frida,” the Marquis de Sade in “Quills” or the famous Captain Barbossa in the “Pirates of the Caribbean” franchise.

Finding out who Lionel Logue – the speech therapist who trained King George VI – was for “The King’s Speech” was difficult, Rush says, until his descendants appeared with photos and his diaries.

“He was pretty dapper – he wasn’t an Australian outback guy. He was polite.

Rich character studies are a Rush specialty, it seems. “I made several biographical films. The pelican in ‘Finding Nemo’ isn’t a biographical role, but he was Australian – that meant a lot to me.

Rush recalls his mid-career change at age 44, when he went from being a recognized film actor when he made three Australian films in 1994-95, the second of them ‘Shine’.

After screenings at the Mill Valley Film Festival in California, he remembers being spotted by “a real hipster guy” outside an Italian restaurant in New York. “He just said, ‘Hey, I loved your movie. I’m a theater actor from Sydney/Melbourne and a guy in New York, a hipster, said ‘Hey, I love your movie.’ Your movie.

Rush admits that costume roles fascinate him, recalling the oversized hat he wore as Barbossa in ‘Pirates of the Caribbean: The Curse of the Black Pearl’.

“I think I should never take that off,” he says. “I always think the hat is the brain of the character. Arrogance, flamboyance, power – my hat is bigger than yours. Very meaningful.”

The tailored suit for his character Virgil Oldman, a “very rich man” in “The Best Offer” had an equally intoxicating effect, Rush recalls. “I always say that the outline of the costume is a good indicator of a lot of things about the character’s inner life.”

And a great piece of costume should be seen parading, adds Rush. “You know, close-ups are very important in a film. But I always think of extremely wide shots, where often nothing significant happens but where you have to see the character full length. With Barbossa walking across the deck, you think, “This is where you own the ship.” It is a moment of authority.

Rush’s visit to Karlovy Vary is the first of its kind in four years. During this time he fought and won a libel case against a Sydney newspaper. He was awarded $1.9 million after allegations Rush printed had behaved inappropriately towards an actress.

Rush refuses to discuss the case with Varietyalthough in an interview with sister title Deadline he says: “It was a bruise for everyone involved, I think, on both sides. It was an overblown, bloated tabloid event [the defamation case] and the court found the result in my favor and I don’t like to talk about it.