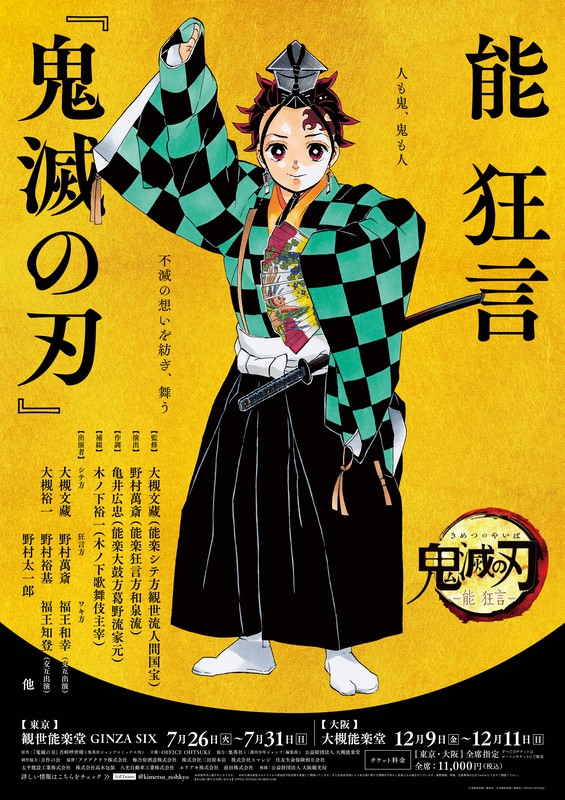 TOKYO – The hit Japanese manga “Demon Slayer: Kimetsu no Yaiba” will be adapted into a Noh play produced and performed by masters of the traditional arts.

Titled “Noh Kyogen ‘Kimetsu no Yaiba’,” the play will be supervised by Bunzo Ohtsuki, a Living National Treasure and Person of Cultural Merit winner who often plays protagonists at Noh’s Kanze school, and directed by Mansai Nomura. , an Izumi-school “Kyogen” comic theater actor.

Manga artist Koyoharu Gotoge’s “Demon Slayer” series was published in Shueisha Inc.’s popular weekly manga magazine “Shukan Shonen Jump” between February 2016 and May 2020, and 23 volumes of the title are available. Depicting sad tales of humans and demons, a total of over 150 million copies, including electronic editions, have been sold. The film adaptation “Demon Slayer — Kimetsu no Yaiba — The Movie: Mugen Train” also grossed over 40 billion yen (about $326 million) in box office sales in Japan.

The theme of the play roughly translates to: “Humans are demons and demons are also humans who weave eternal thoughts and dance.” The roles of protagonist Tanjiro Kamado and his younger sister Nezuko will be played by Noh’s Kanze-style protagonist actor Yuichi Ohtsuki. His master Bunzo will also play the role of Rui, who holds the position of Lower Rank Five, and Mansai will play the roles of characters including the antagonist Muzan Kibutsuji. Yuichi Kinoshita, who heads the Kinoshita-Kabuki company, will be in charge of the screenplay.