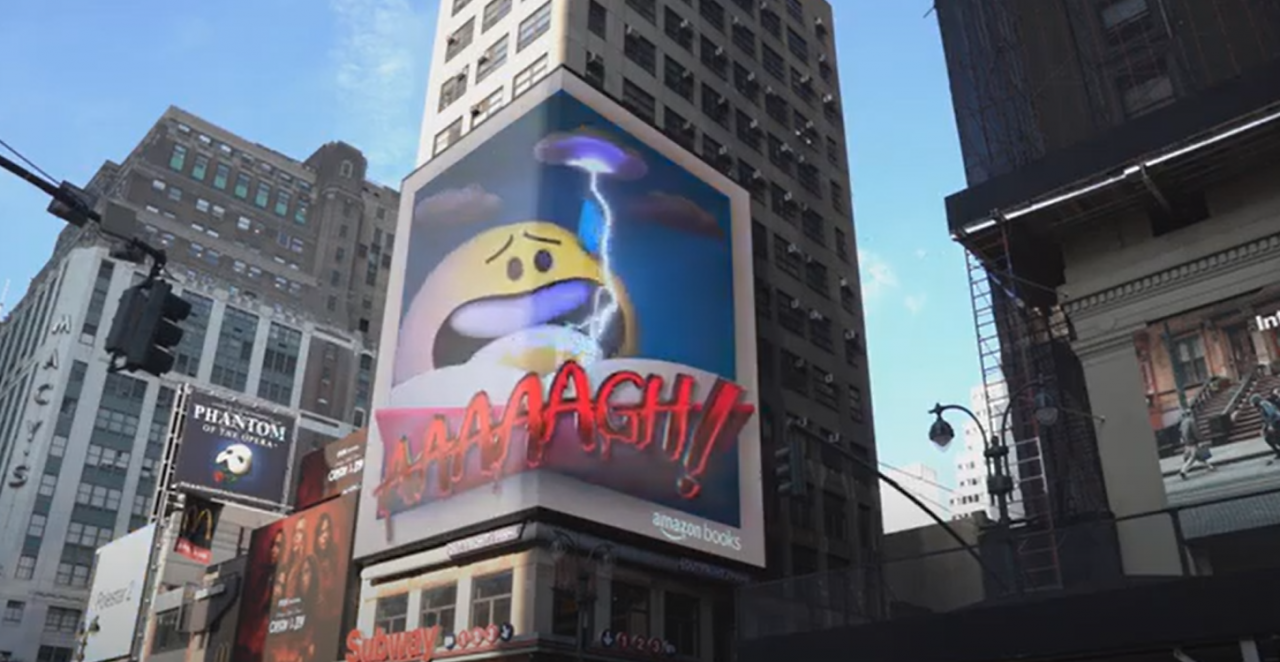 Last week, Amazon Books launched a global brand campaign depicting the magic of the imagination sparked by reading. The drum sat down with Droga5 to learn how he tied together a beautifully shot multimedia video, multiple outdoor (OOH) posters and an emoji-laden 3D billboard into one cohesive and memorable idea.

The campaign, titled ‘That Reading Feeling Awaits’, is underscored by a hero movie focusing on five unique animated scenes with one thing in common – people absolutely engrossed in the novels. The plots of these stories are brought to life using illustrations, SFX, clays, mimic manga, sci-fi, and even romantic styles.

Here’s how the idea came to life.

“For them, success in the marketplace is about getting more people to want to read, and that goes beyond selling books, beyond anything specifically about Amazon. The reason we were able to to arrive at such a universal vision is that we approached it from the premise that “we just want people to read” rather than we want people to shop on Amazon. And that gives you a very different goal by which you create the work.

The tech company needed an ad that could reinvigorate inactive readers and “people who have read in the past and have somehow gone through life and work to remind them how awesome books are.” explains Matt Hubbard, creative director at Droga5 London. The work is explosive and exciting, closer to what one would expect from PlayStation and Xbox – no books.

The latest news and marketing information straight to your inbox.

Get the most out of The Drum by choosing from a range of excellent email briefings, whether it’s daily news, weekly recaps or in-depth media or creative dives.

“It’s become easier to do something other than read. It may be easier to watch Netflix or get lost in social media,” continues Hubbard. “But actually, as soon as people start reading again, they rediscover their love for it.”

The team recalled the days when they had the uninterrupted freedom to enjoy a good book before engaging in creative craftsmanship. What did they like about reading?

“Books can be more than entertainment — they can open up your view of the world, they can help you learn more about yourself, they can blow your mind,” adds Hubbard. “I could be on a subway reading and it wouldn’t look like anything from the outside, but inside it’s a totally different story.”

Knowing they were competing in a busy scrolling and streaming world, they focused on realizing all the magical inner thoughts one has when engrossed in a story.

Hubbard continues, “It’s such a unique feeling that doesn’t come from anywhere else, because everything else is kind of served to you on a platter. Here’s the visual, here’s what it looks like. But with reading, it’s a truly unique experience.

He adds, “We can all read the exact same book and get totally different results.”

Tasked with bringing the campaign to life, director Tom Noakes read the script and immediately knew the right people for the job. There were over twenty illustrators working simultaneously on various aspects of the project. “It gave them the opportunity to really focus on this unique genre and make the most of it,” adds Shelley Smoler, Creative Director at Droga5.

Each illustrator was briefed on the book genre and the specific word or illustration to be brought to life, leading to a rich combination of styles. A world of animated madness, triggered by a single word – much like the books featured in the campaign. With such a large group of people, all living in different time zones, managing them was no small feat.

“It was about making sure that not only [do we get] all the different pieces from these different illustrators, animators, and artists, but also making sure they all fit together cohesively,” adds Hubbard. “We had a collaborative effort between the director, the creatives, our head of design Chris Chapman and his design team, and all the illustrators. Everyone held hands and did it.

The team realized that there was no emoji for reading and instead people used the image of the book associated with the “nerd” face.

Contemporary reading to younger audiences was one of Amazon’s goals, so geeky sentiment just wasn’t going to cut it. Cool people read, right?

Knowing this, the team created around 15-20 different emojis to convey different emotions related to reading. Excitingly, these will come to life at Penn Station with a 3D billboard.

“We chose three feelings depicted in the books and they come to life with this large 3D emoji,” says Hubbard, noting that all of the emojis convey the campaign slogan and that the 3D construction will include a massive love, scared and ‘face awww.

“Books deserve so much more,” he concludes.

Interested in creative campaigns? Check out our Ad of the Day section and sign up for our Ads of the Week newsletter so you don’t miss a thing.