Jefferson City is home to passionate comic book fans, as well as creators 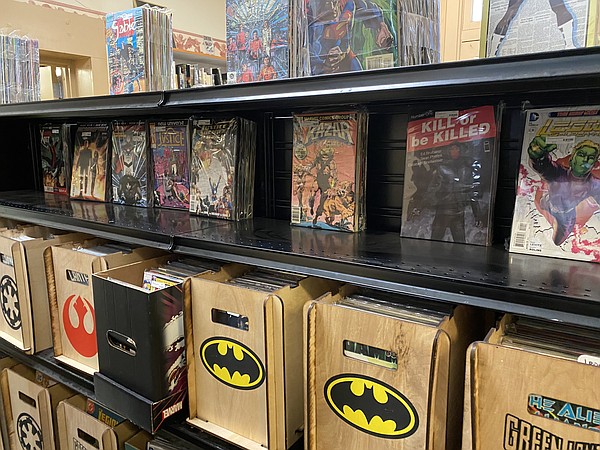 Jefferson City is home to a community of comic book and graphic novel fans, including local creators and store owners.

Graphic novels have been very popular at the Missouri River Regional Library, with all ages checking them out. The library has a separate section for children’s graphic novels, with age-appropriate selections for children.

The main section of the graphic novel consists of several shelves. A variety of graphic novels and manga are available, with selections from Marvel, DC, and other independent publishing companies.

Graphic novels and comic books have been popular enough in Jefferson City that two comic book shops have opened. One of the stores is The Antiquarium, located at 504 East High St. This store sells comics, graphic novels, books, and other board and card game items.

The Antiquarium is currently owned by Lance Salmons, who took over ownership in 2005. The previous owner opened the store in the early 1990s. Salmons said demand and interest in comic books and graphic novels has fluctuated over the years.

The store is attracting a mix of new customers, while continuing to attract repeat customers, Salmons said. Jefferson City has a very dedicated and loyal comic book community.

“I see new people all the time,” Salmons said. “I’ve had people who have been here since I opened, and some who were with the previous owner.”

Salmons said the comic book community has been growing in Jefferson City, especially in recent years.

“Since coming here in the early 90s, I’ve noticed it’s been a lot more crowded,” Salmons said. “It’s a much bigger community than I thought.”

Wolters said he was inspired to open Capital City Comics because of his love and passion for comic books. Prior to opening the current store, Wolters sold comic books for over 30 years.

“I’m a fan, and always have been a fan,” Wolters said.

A local graphic novel creator is Nandor Shaffer, who has been creating content for four years. He always had a passion for storytelling, nurtured as a child watching movies and reading books.

Shaffer’s writing career began not with graphic novels, but with blogs. He used to write blog posts for Game Informer, which repeatedly awarded him the best blog posts on the website. Shaffer eventually decided he wanted to pursue creative writing.

“I was tired of writing about what other people were doing and wanted people to write about what I was doing,” Shaffer said.

Shaffer started writing comics when he was 17. He chose this medium because it was the one he was most familiar with and felt most comfortable with.

Shaffer has promoted his work on Kickstarter, where people interested in his work can support him. He has so far put four of his projects on the platform, all of which have been fully funded.

Crowdfunding websites have grown in size recently due to the COVID-19 pandemic, Shaffer said. The biggest comic book companies such as Marvel and DC Comics weren’t publishing at the time, which Shaffer says caused comic book fans to discover more independent books online.

One of Shaffer’s goals for his creative career is to work with Marvel or DC Comics to write some of their famous characters. If he had the chance, his dream character to write would be Captain America.

Shaffer’s current projects include the second issue of Man-Child, which follows the Kickstarter-funded first issue. This issue will also launch on Kickstarter, with a funding period starting September 30 and lasting for 30 days.

Shaffer said the local comedy community in Jefferson City is quite large and has been very supportive of his work.

Creating graphic novels hasn’t been the main source of income for Shaffer, who also works full-time as the assistant manager of Downtown Book and Toy.

“It doesn’t pay all the bills, but it makes life easier both financially and for my mental health,” Shaffer said.

Shaffer’s graphic novels and comic books are currently on sale at locations in Jefferson City and Columbia. Downtown Book and Toy, The Antiquarium and Capital City Comics sell his work in Jefferson City, with Distant Planet Comics and Collectibles and Rock Bottom Comics in Columbia also selling them. The works are also available on Shaffer’s online store and on Amazon.

The Antiquarium has a selection of comics available for $1. Jefferson City’s other comic book store, Capital City Comics, opened in 2020.

Shaffer poses in front of his graphic novels at Downtown Book and Toy.

Shaffer writes in his journal at Downtown Book and Toy.