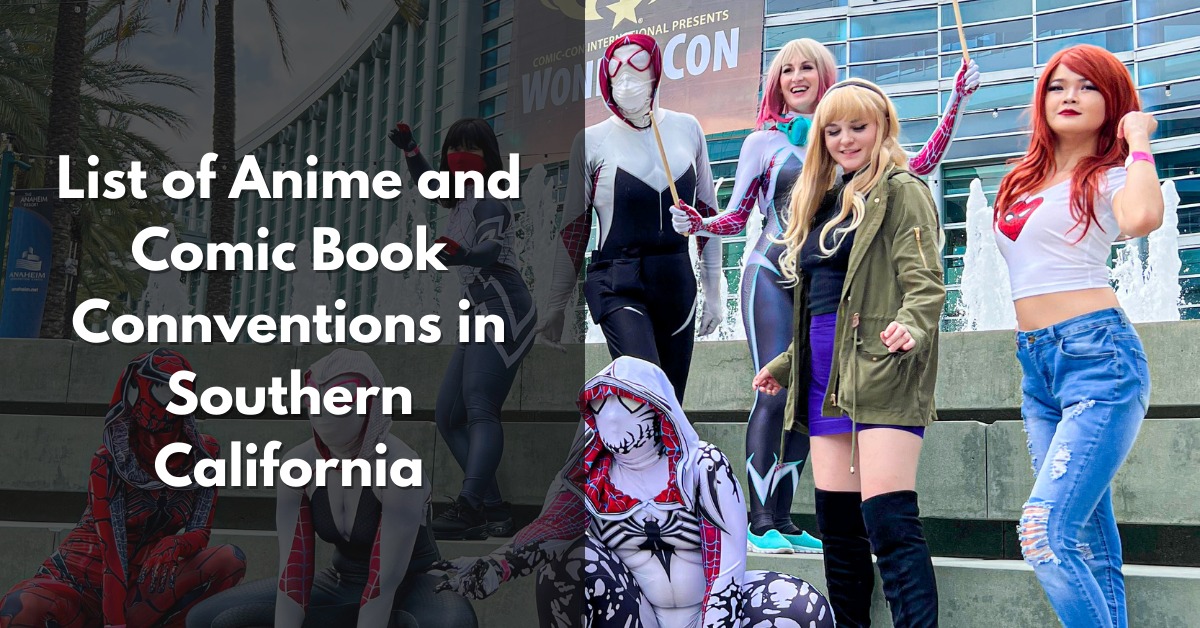 We’ve put together a list of upcoming anime and comic book conventions in Southern California. And while there are countless pop-up events in the So Cal area, these are just a few of the area’s biggest events.

Star Wars Celebration is Lucasfilm’s official event celebrating all things Star Wars. There, you can expect immersive experiences, an interactive showroom, and major announcements. The event is about to sell out. If this is important to you, buy your tickets as soon as possible.

anime by the river

Anime Expo, abbreviated as AX, is an American anime convention held in Los Angeles, California and organized by the Society for the Promotion of Japanese Animation. The convention takes place every year on the first weekend of July and is spread over four days. Anime Expo is the biggest anime convention around, with over 100,000 fans in attendance.

The SAN DIEGO COMIC CONVENTION (Comic-Con International) is a California non-profit, charitable corporation dedicated to raising awareness and appreciation among the general public for comic books and forms of comic art. related popular art, including participation in and support of public presentations, conventions, exhibitions, museums and other public outreach activities that celebrate the historic and ongoing contribution of comics to art and culture.

Fashion show of his universe

With attendance exceeding 130,000 in recent years – at a convention center that has reached its maximum space – the event has grown to include satellite locations, including local hotels and outdoor parks. Programming events, games, cartoons, the Comic-Con International Independent Film Festival and the Eisner Awards all take place outside the Convention Center, creating a campus-like atmosphere for the convention in downtown San Diego.

NEW FOR 2022: You must be a D23 Gold or General member to purchase tickets. Fans can join D23 with a Gold Membership ($99.99), Gold Duo Membership ($129.99), or General Membership (free) at JoinD23.com. Attendees will be able to secure advance reservations for select panels and experiences through a new random selection process closer to the event. A new preferential seat ticket option will be available for Hall D23. You will be able to easily transfer your additional guest badges to your family and friends who will be accompanying you.

The 4th Annual Anime Pasadena Event will be back on November 19-20. Anime Pasadena is a 2-day event focused on anime, cosplay, and nerd culture in Pasadena, CA.

Lively Los Angeles is held at the Long Beach Convention Center. This scam offers everything from a cosplay masquerade and fashion show to dances, parties and plenty of photo opportunities. All of these things celebrate anime and the many forms anime takes. Anime Los Angeles has a reputation for having an abundant cosplay community and being very cosplay-friendly. There are several spaces dedicated to cosplay gatherings, photo studios, and cosplay games.

Gallifrey One is an annual North American science fiction convention focusing primarily on British television series Doctor Who and its spin-offs, including Torchwood, K-9 and The Sarah Jane Adventures, with an added focus on British and American sci-fi TV media, held each February in Los Angeles.

The Comic-Con Handbook: What You Need at EVERY Convention

How to Host a Cosplay Meetup at Your Local Comic Con

How to Host a Cosplay Meetup at Your Local Comic Con