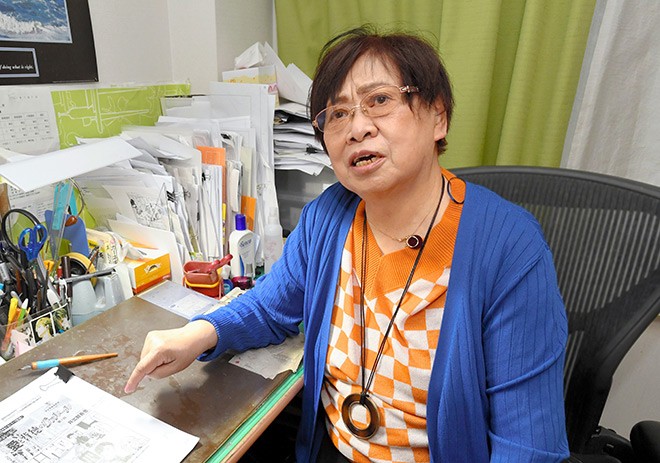 Veteran manga artist Chikae Ide’s latest work follows her common theme of romance and relationships, but “Poison Love” is quite different from her previous pieces.

First, it’s based on a true story about a woman in love in an international romance who gets scammed out of 75 million yen ($523,200).

And second, the protagonists are Ide herself and a man she believed to be Mark Ruffalo, the Hollywood actor who plays the Bruce Banner-Hulk character in the “Avengers” movies.

Ide, 74, is known as “the queen of female comics” for her dozens of works targeting women.

She says she hopes her latest work, a confession of sorts, will help others avoid being scammed in international online romances.

It was February 2018 when Ide found a message written in English on his Facebook account from someone claiming to be Ruffalo.

Ide only half believed the award-winning actor would contact her, but she responded.

Using a translation function on her home computer, she introduced herself in English as a 70-year-old cartoonist and attached a photo of herself.

“You look pretty cool with your work,” the poster replied.

Ide was flattered by the enthusiastic praise.

When she was in her thirties, Ide married a violent man who led a life of debauchery.

She was the breadwinner of the family and she also raised their three children virtually alone before divorcing.

Ide described his past to “Mark”, who was listed as 20 years younger than the artist.

He expressed his anger towards her ex-husband and told him, “I will never make you sad.”

He also said he was saddened by the death of his younger brother and that secret negotiations were underway with his wife for a divorce.

One of Ide’s friends who lives in the US warned her the poster might be a poser, noting that the person claiming to be Ruffalo writes ‘like someone who hasn’t learned English’ .

(The real Ruffalo was born in the English-speaking US state of Wisconsin, according to the IMDb website.)

“I’m sure it was Mark himself who was behind the screen chatting with me,” Ide said.

She didn’t realize at the time that it was a “deepfake” video, and her romantic feelings for the imposter intensified.

“He respected my work and he said that I, this old lady, am beautiful,” recalls Ide. “He also said that the age difference was not a problem for him and that he wanted to make me happy.”

She added that her words “squeezed my heart and brought tears to my eyes”.

In September of that year, they unofficially married online.

After the union, the actor was suddenly plagued by money problems.

Just a month into the marriage, he asked Ide to wire him $1,100 for a plane ticket.

“I missed a flight from New York to the West Coast because of my divorce,” he told her.

He asked her to send the money to a bank account in someone else’s name, saying his own account was being watched by the court.

Ide traveled from his home in Kyoto to an overseas money transfer agency in Osaka.

This “favor” was just the beginning.

He then asked Ide to send him $4,000 as he was having trouble collecting his performance fee.

Another time, he said he injured his foot and a backup actor replacing him got robbed. He asked her for $3,000.

Each time, he promised to reimburse her. But Ide never received even a penny in return. And she ended up exhausting all her savings.

He continued to ask her for money: “I beg you, my wife.

To cover her persistent monetary demands, Ide sold her jewelry. She delayed paying her assistant’s wages and fell behind on her utility bills.

She even dipped into her eldest son’s savings and made him take out as many consumer loans as possible.

Ide wired her “husband” more than 10 million yen in one month.

But he still didn’t stop.

In an apparent attempt to cover up the scam, he asked her to deal with his hidden fortune of $12 million in cash. He told her that she could withdraw about 200 million yen from the total.

Soon, two men delivered a bag to her home. Inside the bag, Ide saw a pile of black papers dusted with white powder.

She placed some of these papers in a liquid that the delivery people called “oil”. They said the cash revealed the papers were genuine $100 bills.

The men left his house with a warning: “Do not touch the oil because it is poison.

Ide wanted to turn those black bills into cash to get her money back and continue to support her lover and their relationship.

She rushed to raise money to buy more oil and cover her beloved’s travel expenses when he asked her to.

She had a sponsorship deal with luxury brand Gucci worth 35 million yen at the time. She gave him most of that money.

She even sold her original drawings for cash to cover her needs.

His messages in English, even after being translated into Japanese, often made no sense to her. She therefore interpreted them in her own way.

During all this time, she never met her husband in person.

Yet he asked her to transfer money to different bank accounts on different days. His messages also included the supposed names of an embassy official and a customs officer.

At some point he started referring to the black notes as “cocaine”.

Then he told her he had leukemia.

Ide confidently believed that she was being given “tests she had to pass for a future with her lover”.

In the spring of 2021, Ide’s eldest daughter who lived nearby found a foreclosure warrant sent by a mortgage lender to the manga artist’s home.

The mother then told her daughter about the “marriage” to Mark Ruffalo.

“If your husband is a millionaire celebrity, then why do you need the money so much?” asked the girl.

The girl gave Ide an ultimatum. She lent Ide 200,000 yen and said, “If you don’t get this money back from her, then you have to admit it’s a scam.”

Ide did not recover the money.

Yet it took another three months and the help of her children for Ide to escape her husband’s online mind control.

She wrote a rough outline of the 3.5-year ordeal that cost her 75 million yen. She took the document along with the black notes to a nearby police station in June 2021.

So far, police have been unable to locate the person posing as Mark Ruffalo.

“More and more people, regardless of age and gender, are feeling isolated in the COVID-19 pandemic. They search for dating on the Internet and become victims,” said a representative of the center.

Ide looked back and said, “As I got older, I worried more about my health and lost my job. The scammer found a way to fill the void in my heart.

Ide recently published her novel “Poison Love” based on her ordeal, as well as a comic book with the same title, which is a more fictionalized account.

“It was such a stupid experience,” Ide said. “But I hope people will take this as a lesson. I apologize to my friends and acquaintances who lent me money when I refused to listen to them. And I swear I will continue to draw manga until I die to pay them back.