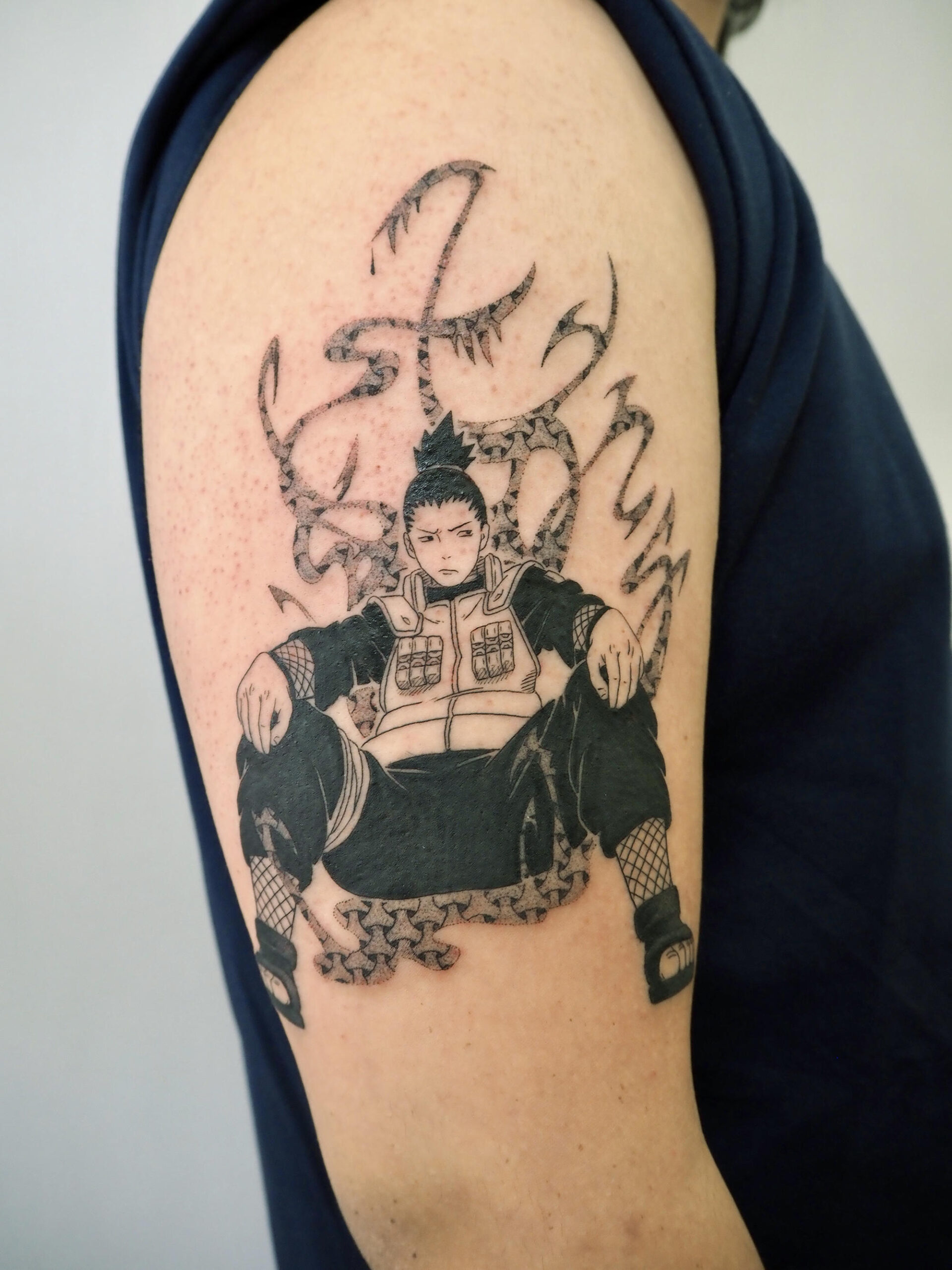 Mimi-Sama is a French native who has tattooed in various places including Melbourne and Tokyo. She then moved to San Francisco, where she has worked since 2021 in the prominent Black Serum studio. With her husband’s support for travel and work, they share a similar lifestyle – enjoying new experiences, which has led to them visiting 15 countries. They are more settled now that they have a four-year-old daughter; their daughter Rosalina is a bit too young to understand her mother’s career but is an ardent anime fan. Mimi-SamaHer art is influenced by anime and manga, which she does in black ink, more in the comic style than animation, with textures and expressiveness.

Mimi-Sama will also appear as a guest artist at the Foxes 10K in Los Angeles and will attend conventions in Cleveland, Baltimore, Houston and Kansas City.

Above: Shikamaru in “Mangala” style by Mimi-Sama.

Saitama is the main protagonist of the “One-Punch Man” anime series.

You started tattooing in 2014; what attracted you to this job?

My entry into the tattoo industry was by chance. I continued to draw even when I had a stable career as assistant manager of four-star hotels on the Champs Elysées in Paris. But my work demanded all my attention and energy. Even though I enjoyed my previous job: it was an exciting life, working for important people, organizing receptions, etc., one day I broke down for no apparent reason, just a burnout. I just had the feeling that something was missing. I worked in this industry for six years with only two weeks vacation, and although I still loved it, it just wasn’t for me anymore. So I decided to quit one morning, with no plans for the future. I had a friend who ran a tattoo parlour, 20 minutes walk from my Paris apartment at the time. I had gotten a tattoo there before, so I called him and asked if I could spend a day or two at his shop to kill time and rediscover my love of drawing. He agreed but said he would never teach me to tattoo.

Rukia and Renji in “Bleach”.

I was there every day afterwards, enjoying the atmosphere. I was surprised by the confidence of the customers in the work of the artists. One day a friend asked me if I wanted to be a tattoo artist, and of course I said yes. A week later I was training with friends, but the store was sold to a new owner who didn’t want an apprentice a month later. I needed to find a new place quickly, but I couldn’t. Some places gave me a tattoo chair without any advice or direction. I wouldn’t say I liked the vibe or the way they talked to customers like they were sometimes drunk and didn’t care about them.

In my previous career, I was managing over 100 people, doing marketing, responsibility, administration and other tasks, so I thought to myself, “Why can’t I open my own shop with my own rules and welcome customers to a safe space? where they will feel listened to and respected? So I opened my shop and invited talented artists to collaborate with me. This way, I knew my clients’ privacy would be protected and I could continue to learn alongside talented artists. It was my first store, located near the Panthéon in the heart of Paris.

What brought you to the themes and the style that you do?

My universe is centered on two main sources of inspiration: graphic blackwork and Japanese pop culture. Even though I didn’t have much training, one of the first things I learned was that “a good tattoo starts with good lines”. I started doing blackwork with many patterns and mandalas. I also love how these styles blend into the body. The human body is not a flat canvas; it’s dynamic and one of a kind. During my many travels (Germany, Belgium, Japan, Nepal, Australia, China and Vietnam), I met artists specializing in graphic style who taught me the techniques of dot and whip shading and the use of very fine lines.

My second source of inspiration dates back to my teenage years when I read manga and played video games. After the birth of my daughter, I wanted to devote my time to activities that I enjoy, especially those with uplifting themes. Customers come to express themselves through tattoos, and the pieces they receive are often very personal to them. And I like to share our common interests with them and help them express their feelings and emotions through their favorite anime or manga. After deciding to devote myself to my passion for Japanese culture, I moved to Tokyo and spent almost a year working in Ichi Hatano‘s studio, where I gained a deeper understanding of the culture. I worked on this job change in the last four years.

Mimi-Sama’s “Mangala” tattoo style is seen in another example.

Do you have a name for your work?

Graphic elements are integrated into my creations as needed. I call this style “Mangala” (a combination of manga and mandala), and I keep in mind that my line art should be as precise as possible; the piece must flow with the body and make sense from far and near.

A tattoo that healed eight months; a scene from “My Neighbor Totoro”.

What are the most common manga and anime character requests?

The Ghibli movies, especially “My Neighbor Totoro” and “Spirited Away”, are a huge source of inspiration for my clients. In terms of ShÅnen manga, “Naruto” and, lately, “Jujutsu Kaisen” and “Demon Slayer” are in high demand. But what’s exciting is that as the manga is produced, it evolves and new classics appear all the time!

Deku in action in “My Hero Academia”.

What are your favorite animated films?

“Howl’s Moving Castle”, directed by Hayao Miyazaki and produced by Studio Ghibli, is my favorite. I love the eccentricities of all the characters. And who wouldn’t want to live in a moving castle? It’s incredible ! In addition to Japanese animation, I appreciate the French animation scene; one of my favorite films of all time is “Les Triplettes de Belleville”. There’s a graphic feel to it, with so many emotions expressed without dialogue.

Why mainly use black ink instead of color?

It’s mostly a matter of personal taste. I have always preferred black ink tattoos. Because black ink allows me to create a variety of textures, I don’t need to use colors. Also, to be more faithful to the original art, I prefer manga over anime as inspiration. Mangaka’s work is line-based and both understated and expressive. This is what I try to convey through my tattoo designs.

Noi is an anime and manga character from the “Dorohedoro” series.

You specialize in tattooing fine lines; I have seen healed examples; how does the job look after a few years? Does it need touch-ups?

Thanks to improved needles and ink, it is now possible to work with small details without compromising the quality of the tattoo over the years. It takes experience and knowledge, but fine line tattoos can heal just as well as other tattoos. I generally do less retouching on the fine line because I know how to insert the ink even for small details.

A beautiful piece with color accents from “Spirited Away”.

You live in San Francisco; what brought you to work here?

As a European, the United States is the land of tattoos! I’ve traveled and worked in over 15 countries, but when I tell my colleagues I work in the United States, they’re overjoyed because it’s such a big accomplishment. And you don’t feel like a foreigner when you have tattoos in the United States; it is well accepted. I have so many wonderful people from all over the world working with me. It’s very competitive, but I’ve always liked to push myself, and this is the country where I can do that. Besides that, I can live and work in one of the best cities in the world, San Francisco. It is a vibrant cultural melting pot, and the city and its surroundings are a great source of inspiration for life, love and art!

Mimi-Sama with her daughter at a convention in Taiwan.

So if you have a client who is coming from out of town to be inked by you, and they want to know where to go in San Francisco. What are your recommendations?

I like Japantown because few cities have a Japanese district, and there are products specific to the kitchen or other. Every time I go there, it reminds me of my time in Tokyo. Another part of the city that I enjoy is Presidio Park, which offers stunning views of the Golden Gate Bridge. Finally, Valencia Street, where the Black Serum studio is located, is very active on weekends. They close the road to cars and install DJs or bands to add even more atmosphere to this street full of bars and restaurants.