Recording with a Marx Brothers comedy at Taproot 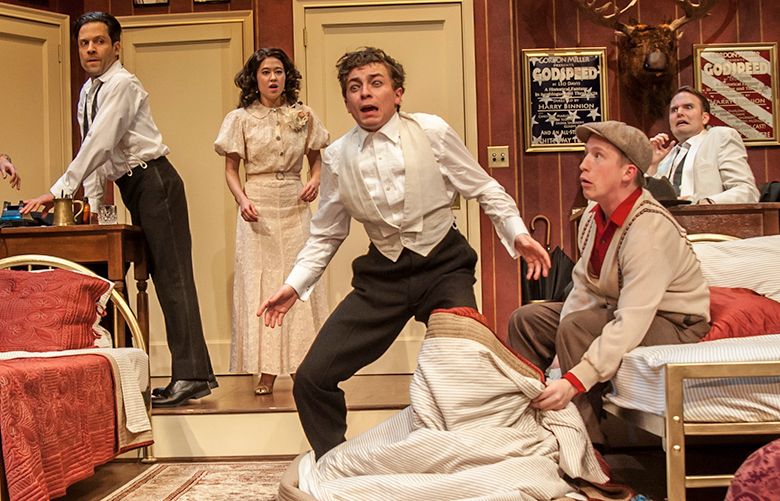 A cast of nimble actors bring the hotel’s “Room Service” silliness to life at the Taproot Theater.

In their best films, the Marx Brothers generated a cavalcade of increasing comic anarchy, breaking all the rules of comic convention and narrative coherence along the way. “Room Service,” the brothers’ 1938 film based on the play by Allen Boretz and John Murray, is not in that higher tier.

And yet, “Room Service” is probably the best choice for a Marx-adjacent stage production today. Boretz and Murray’s play wasn’t written as a vehicle for Marx, so there’s no need to try to recreate their ineffable comic chemistry, a dupe race from every angle.

On screen, this winding farce brings out the comic energy of Groucho, Chico and Harpo. Despite a wild streak with a live turkey, “Room Service” is one of their quieter films. On stage, however, it presents a host of opportunities for nimble actors.

The Taproot Theater production, expertly maneuvered by director Karen Lund, features a capable cast ready to make the most of those opportunities. Mike Spee suffers from a blood-pressure-raising exasperation as a beleaguered hotel manager. Daniel Stoltenberg launches sarcastic comments brilliantly as a haughty director. Christopher Morson nails every fall like a hopelessly naïve playwright. Bill Johns is bursting with mad vigor in a quartet of supporting roles.

At the center of this production is a less traditionally wacky performance. Erwin Galán stars as Gordon Miller, a theater producer trying to mount an epic American story against the overwhelming odds of his own misery. Miller is responsible for much of the room’s pandemonium as he tries to secure financial support and stay ahead of hotel staff who insist he pay his long-overdue bill. .

Galán brings a studied intensity to dramatic roles, and his approach is similar here. Initially, this seriousness seems like an off-note, but by turning the play’s agent of chaos into its straight man, Galán opens up opportunities for other forms of comedic madness to unfold around him.

This is especially evident in Nikki Visel’s performance as Mrs. Wagner, the hotel superior who arrives ready to evict Miller and his band of compatriots or make them pay. (Maybe both.)

Wagner is a classic humorless authority figure, but Visel cleverly shows how to gradually aggravate a character’s neuroses, his patience deteriorating as Miller devises new ways to avoid expulsion. A hijacked room-service cart, a false attack of measles, a supposed suicide; each ploy pushes her a little closer to the edge.

Taproot’s decision to swap the role of Wagner and two other supporting roles played by Kim Morris adds much-needed balance to a play with only two traditionally female roles that are little more than barely conceived love interests. (The film wasted Lucille Ball and Ann Miller in those parts – perhaps its most criminal failing.)

Like the old hotel it’s housed in, “Room Service” tends to creak and whine a bit. Sometimes a lot. But even as the play threatens a Gordon Miller-esque using his welcome, Taproot’s production sparkles.