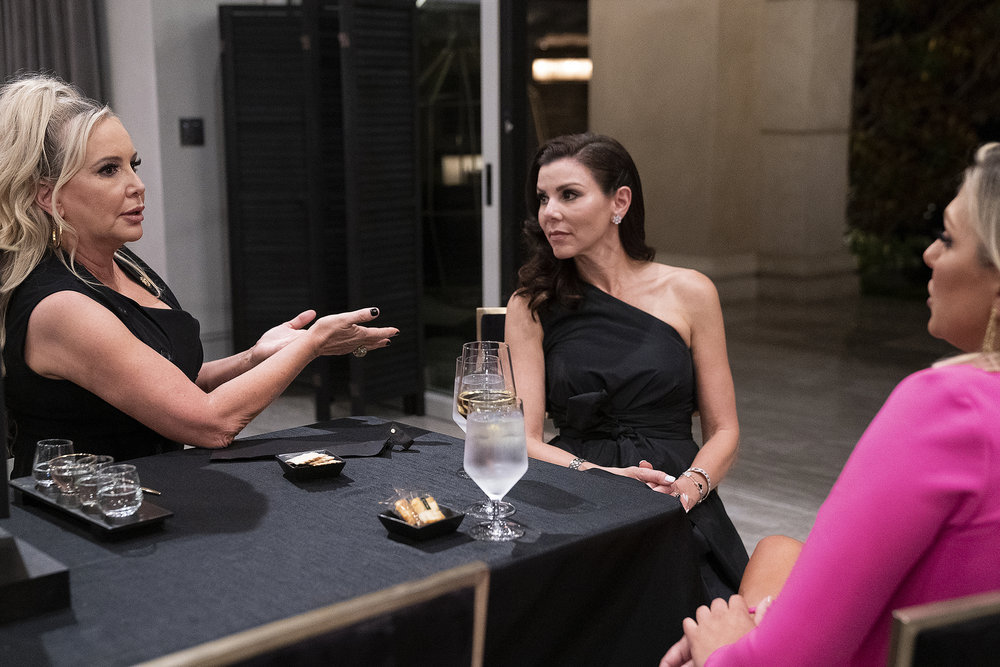 Heather Dubrow throws another over-the-top party at her mansion — because, of course, she is — when who do we spy, but singer Richard Marx and his wife, actress Daisy Fuentes, enter.

And if Marx is on “The Real Housewives of Orange County,” you know he won’t be going home until he delivers a commissioned performance for Heather.

Our hostess, just in time, shares the story of when a Marx song taught freshly dumped Heather that one day, God was her witness, she would love again.

“I remember crying in the car, and this song came on the radio, and I cried even more,” Heather tells her guests, who included housewives Gina Kirschenheiter and Jen Armstrong, and their respective guys.

“And I thought, ‘God, I hope one day I find someone in my life who loves me like this,'” she said. 18, not only are you going to find that person, but that guy on the radio is going to be a really good friend of yours.”

Marx then picks up an acoustic guitar that was lying around the Dubrow mansion and sings “Right Here Waiting” while Heather beams and all of her guests make faces.

Well, everyone except Gina, who isn’t impressed.

“I know Richard Marx because my dad used to play his music,” she tells the camera. “No offense, Rich.”

In particular, the basement party room which, let Gina tell you, is unlike any basement she’s ever seen.

“On Long Island, basements have, like your old gym equipment or a tenant there,” she says in a confessional.

“Yeah, that’s like the coolest basement I’ve ever been in,” Gina replies.

The evening is a closing party for Heather and Terry Dubrow’s new reality show, “7 Year Stitch.” It’s a show in which Heather and Terry, a plastic surgeon, give troubled couples “internal and external makeovers” and try to “stitch them up.”

The rest of this week’s episode is all about Jen throwing her own party to introduce her friends and family to the new brain scan treatment she’s added to her medical practice.

It’s something she calls “personalized neuro-cardiac TMS” and, no, we don’t know exactly what that means.

Jen worries that housewife Noella Bergener will show up and rain on Jen’s parade, which, just Noella tends to take over a room. So she calls her and makes Noella promise to be nice or stay home, which is rude!

Jen gives a presentation that begins with “Let’s look at some brains!” and runs at least 15 minutes longer than the 10 minutes it promised to take, a fact the editors hammer home with a shot or two of guests yawning.

Gina brought her ex-husband Matt – don’t ask – and her new girlfriend Britt, who is a former housewife, Kelly Dodd. The resemblance translates into double takes at different times of Noella, Shannon Storms Beador and Jeana Keough, an original housewife.

Housewife Emily Simpson volunteers to have her brain scanned, and 45 minutes later, still with the bizarre scanner on her head, has been forgotten by the rest of the party.

“Can I have a glass of prosecco and a chicken wing?” she cries in vain.

Elsewhere in this episode, Emily has some sweet moments.

First, when her family and in-laws witness her husband Shane being sworn to the California bar. And later, she meets a man who had been wrongfully imprisoned for 15 years before being exonerated.

Emily, a lawyer like her husband, volunteers for the California Innocence Project after seeing TV shows about wrongfully convicted people and efforts to restore justice.

“So really, binge-watching TV led me to be a humanitarian,” she says.

And Noella goes out to dinner with her mother Nancy.

“That was lovely,” Noella told her mother. “I need to surround myself with bad (women), and you are the queen of that.”

Nancy makes a face as if to say: What did you just call me?