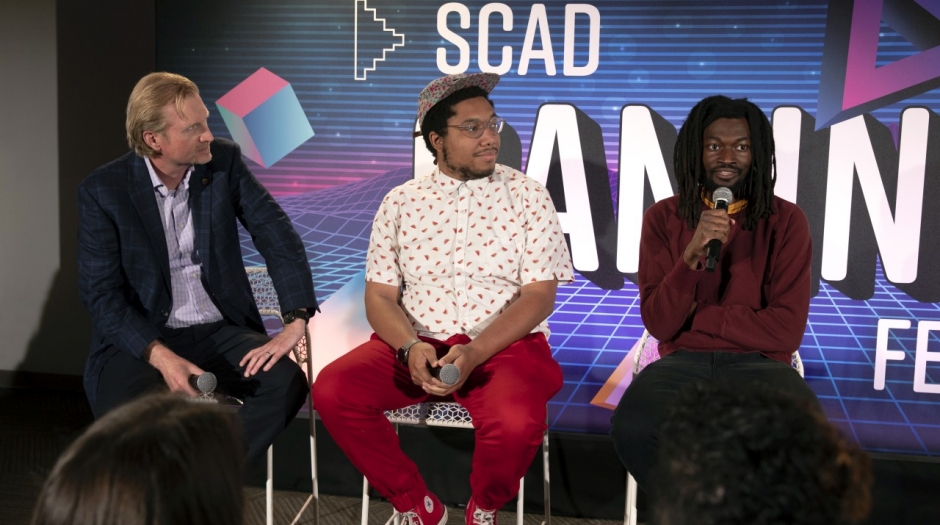 For game designer Seth Smith and Emmy Award-winning art director and illustrator Lauren Brown, Pokemon was a major inspiration not only for their love of video games and storytelling, but also for their future efforts to foster a diverse community in their industry.

“Growing up, I didn’t see any characters that looked like me at all,” Brown says, recalling her early years as a young gamer. “It was something I thought I had to live with. But I remember the first time I played a Pokemon game where I could have a character with a darker complexion. I was so excited and seeing this, for the first time, felt so meaningful to me because I got to see and immerse myself even more in the game. I want people to have this experience without thinking that they have to wait, or they would be excluded.

Smith, who wanted to be a game designer since he was five, had a similar realization, stemming from Pokemon.

“As a child, I was really into certain types of games – like Pokemon – but I couldn’t always afford to buy them outright, so I always appreciated when there were many ways to get into that story experience, whether through manga, comic, a TV show and things like that,” he says. “These different access points allowed me to embark on this experiment. Because I got that from so many different games growing up, that’s what I want to do with everything I create.

Both Smith and Brown were guest speakers at Savannah College of Art and Design’s annual GamingFest, an event dedicated to highlighting new trends in gaming and digital media design, as well as giving students the SCAD the latest scoop on the future of gaming and interactive entertainment through curated events with industry insiders.

And, according to Smith and Brown, the future is diverse and dynamic. This goes for games, movies, TV, and even comics and manga.

“What I really want to see in the future, and help build, is a shared experiential universe across media where when you play a game it’s part of the same storyline that was also tied to a tape previous comic, which was connected to a movie, and so on,” says Smith, who currently works at Riot Games as a senior game designer on Valorantfrom the Social and Player Dynamics team. “My overall dream is to create a shared experiential universe that tells stories for diverse people across multiple mediums. I want a narrative universe that promotes diversity, equity, inclusion and belonging.

Smith also calls it a “connected story experience,” the subject of his GamingFest panel presentation.

“There are lots of examples of relative shared stories, but not so many connections,” he explains. “You have the witcher TV show and games, star wars games and movies, Pokemon games, anime and manga. And there are many adaptations. But having a situation where storylines are connected, we haven’t really seen that executed on a very broad level yet. It’s something that we, as an industry, or any future artists who are inclined, have the pleasure and the opportunity to build and start creating.

Dream works’ Jurassic World Camp Cretaceous is an example of Smith’s dream on a smaller scale, where the scenario of the jurassic world live-action films – designed for older audiences – directly affect the events that take place in the children’s animated series Camp Cretaceous. Both scenarios take place in the same universe and help expand the range of jurassic parkfanbase. Smith’s goal is to establish a similarly functioning universe on a much larger scale.

“If you were developing a story where humanity had to travel through different dimensions, maybe one of the mediums for that story is a game that’s more like a management sim card, or a TV series about people who make the vehicles or ships that travel.” Smith notes. “Then there could be a game or a movie about people who meet on that journey and fall in love. Maybe there’s someone who needs to rescue someone from ship to ship, so it’s like a heist movie. In this story we love randomly, there are so many different executions that can appeal to different audience members across all avenues of entertainment.

He adds, “When you think about the idea of ​​combining movie franchises and having crossovers, that’s effectively what we’re talking about, having an IP crossover with another IP, and I want a story to tie that together. . We’ve seen this happen in movies, in some games, in TV shows with combined episodes where all the heroes from those separate TV shows in that episode come together. But we haven’t seen it in all of those mediums together.

In his presentation, Smith noted that this kind of story building would require game developers, filmmakers, animators, writers, and illustrators to deconstruct the way they’ve always been taught to think about storytelling. Creators from very different backgrounds could collaborate on the same world at the same time. This is news to many creative arts students who have chosen a specific major in a particular medium precisely to gain specific expertise. Smith’s concept of connective story experiences would break down the boundaries between these entertainment mediums to focus more on the people they are creating these stories for.

“What I want us to move towards is coming up with ideas for people first and then understanding that people interact with multiple mediums,” Smith says. “The goal is not to look at your IP, or your genre, or your platform, or your medium as this fixed, stagnant community, but rather as vectors of enlargement.”

And a key step to expanding those vectors is developing deep and accurate diversity in character design.

“It allows the player to become more immersed in the game, as they see a range of people as they would in the real world,” says Brown, alumnus of SCAD and current team member at Wildseed Games studio, owned by Black. who gave his own virtual presentation at GamingFest about diversity in character design. “And obviously your spectrum can be a fantastic spectrum, but you still get the full experience of not only being able to play or see those different experiences, but also being able to project yourself onto them.”

While inclusion is always a cornerstone of any storytelling, Brown says diversity in the game – or in a connected story experience where the game is involved – is especially vital, because players aren’t just observers. visual, but real active participants in these worlds.

“When you see a stereotypical character portrayed in a harmful way that doesn’t represent your race well, or doesn’t represent your background and culture well, that immediately closes the door for people to come into that experience,” Brown explains, whose presentation for SCAD included common stereotypes and tropes used in games, from unflattering hair textures and the tired use of tall black men as gang members, to inappropriate and ineffective skin lighting. “It has definitely improved in recent years, but we still have a long way to go. As a young black woman, feeling seen would probably have made a lot of difference and made me love games even more than I already was.

Various characters also contribute to this connected experience by connecting players with each other through characters who have different ideas and ways of thinking.

“Ultimately, you get richer story executions and variations when you’re exposed to different ideas, and when you interact with different people, and look at things from different angles,” Smith says. “Think about your world in terms of who can feel at home in that world, based on what’s happening in the world today, and adjust your narrative that way, and then understand that movies, games, and comics all have different strengths, in terms of that kind of representation.

To develop characters and stories that will have the effect on players that Brown and Smith hope will take hard, often tedious, work much deeper than the donkey kong and Sonic games that Brown says she remembers most from her own childhood. But both players believe fervently that this is the future of not just the gaming industry, but the film, television and entertainment industry as a whole.

“Honestly, I feel like it’s one of those things where when someone does it first, boom, and then everyone’s going to be like, ‘Okay, we need to see more'” , says Smith.

Fortunately, you don’t have to start from scratch to implement stories with connecting experiences.

“The real opportunity here is that for any existing IP that we have, this idea still works,” Smith says. “It’s not too late. If there’s already a game designed for people in one demographic group, we can create another game that expands that universe. This concept isn’t for anything other than progress It’s not about looking at everything we’ve done before and feeling disappointed, but rather about feeling empowered to get things done and expand the audiences, communities and industries that were less represented in the past.

Brown adds, “The more information we get from many different people, the more diverse the development teams are behind the scenes, the better representation we’ll get overall.”