“The bad guys” do good 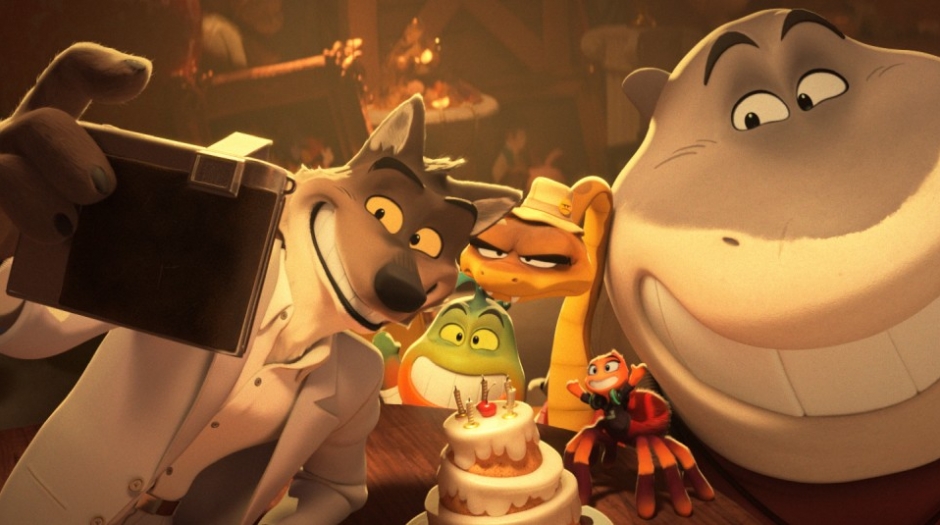 What do you get when you combine the voice talents of Awkwafina, Marc Maron, Craig Robinson, Sam Rockwell, and Anthony Ramos with a bestselling Scholastic book series (aside from a highly unlikely juxtaposition of dramaturgical elements)?

You obtain The villains, the new CG action comedy from DreamWorks Animation, based on the hit New York Times series by Aaron Blabey. A crackerjack crew of outlaw animals – pickpocket Mr. Wolf (Rockwell), safecracker Mr. Snake (Maron), master of disguise Mr. Shark (Robinson), “muscle” Mr. Piranha (Ramos) and hacker Ms. Tarantula (Awkwafina) – have been among the world’s most wanted criminals for years. But when the gang is finally caught, in order to avoid jail, they decided to trick the world into thinking they had changed their ways. However, this ruse takes an unexpected turn when they discover that being good really isn’t so bad, and they’re faced with an unexpected opportunity when a new villain threatens the town.

Directed by veteran animator and award winner Annie Pierre Perifel in his directorial debut, The villains uses notable Los Angeles neighborhoods and landmarks as visual references and inspiration. Notably, the film features a more stylized hybrid design than previous DreamWorks productions, a creative option made possible in part by the success of Sony Pictures Animation. Spider-Man: Into the Spider-Verse. With an 87% Rotten Tomatoes approval rating and worldwide sales of over $150 million to date, The villains can reasonably be considered a significant critical and commercial success.

In a freewheeling group interview, director Perifel and producers Damon Ross and Rebecca Huntley talked about the film’s genesis and production, the breakthrough in visual design and, in general, the good time they had. spent doing The villains.

AWN: Pierre, you have worked in a variety of roles on many major animation projects at DreamWorks. How did this experience help you direct your first feature film?

Pierre Perifel: I’ve worked for 15 years at DreamWorks as an animator, supervising animator and head of animation, as well as storyboards and character design. They all allowed me to look at the production from different angles and sharpen my skills. Above all, this allowed me to get to know the teams well – producers, production teams, creative teams –. So I have excellent communication with everyone, and a relationship of trust has been established. It helped me get through the actual production of the film smoothly.

AWN: What drew you all to this project and what sparked the visual direction you ultimately took?

PP: Damon and I were working on another project together, and he had the first book of The villains on his desk. And I thought, “My god, what is this? It’s so cool.” And I knew right away what I wanted to do with it. So I came back with this quick sketch, and Damon really liked it.

Damon Ross: I still have it. There’s a small coffee stain on it, but it’s definitely a souvenir.

PP: Then, when the other project was put on hold, it gave me a few months to experiment. And the only thing I jumped into again was Bad guys. In the meantime, Damon and I had created a solid relationship, so we were like, let’s do this thing together.

DR: I first heard about the book online. Then I went to the author’s website, saw the cover, and it popped into my head. Even on the author’s website it said it was “Madagascar meets Tarantino”, and my eyes lit up. And he had a great title. Then I received a copy and read it. Sometimes you have a good title, nice pictures, but the story just isn’t there. But this book was better than I could have imagined. It was exactly the tone and sensibility that I love. And it really delivered on its promise, and the characters were just rich and incredibly fun. It ticked all the boxes for me.

Rebecca Huntley: When I arrived, these guys had already been on it for a while. And when I met them, we already had the story, the script was there. And it was a really fun and exciting story that just got you hooked. The idea that we could make a heist movie for a family audience was super appealing, and then talking to them about how we could make a stylistically different movie was also super appealing. So I felt like we had this great story, with the opportunity to make a movie that looks and feels different than what we’ve done in the past.

PP: From the beginning, we tried to capture the freshness of the gang, of Mr. Wolf in particular. But the most important thing was really to make sure that these characters represented the human fears that we project onto these animals. The rest of the world in the film is human. And so the main characters had to be animalistic, but at the same time still very humanized.

DR: And precisely because it is these predatory creatures, which are considered monsters by society, we had to find the humanistic elements, to find their inner vulnerabilities, so that they were attractive and charming at the same time as they were in some way so terrifying. We also made a conscious choice – it wasn’t in the original script, but evolved in later versions – to deviate slightly from the book by making it a kind of human/animal hybrid universe. It’s something different and can be a little confusing at first, but we get into the concept pretty early on and I think most viewers buy into it.

AWN: There has been great success recently with movies that have used non-traditional built-in 2D/3D styles. Was there a push for this film to be different, or was it something you decided based on your own sensibilities and where you wanted to take it?

PP: No, there was no pressure. It was just us.

HR: It was actually liberating that we weren’t trying to aim for anything in particular, that Pierre had an idea of ​​where he wanted to go, and it was a path of exploration and discovery together.

AWN: Can you say a bit more about where you got your inspiration for the look of the film and what you were trying to achieve?

PP: It was something that I had wanted to explore for a long time and had never had the opportunity to do because I had never been in this position. It’s influenced a lot by my own background in visual arts growing up in France, as well as the French graphic novel and French animation scene, especially smaller independent films. These are often 2D films.

France is also at the convergence of so many influences – not just European culture, but also anime and manga culture. It is this crucible with which I grew up. And so you will find Miyazaki and cowboy bebopas well as Akira Toriyama, the creator of dragonball. And certainly influences from American animation, which I’ve always loved. So it all comes together to give the movie its own stylized look that you haven’t really seen before.

AWN: Did it lead to significant production challenges that you might not have faced if you had used a more traditional CG production pipeline?

PP: Yes, he did. For example, we have a ray tracing render at the studio that we started using for Dragon 2, I think, it makes the lighting and visuals look realistic. So we had to fight against the computer a bit to make it less realistic. Our teams are trained to create particular simulation effects, and I asked them to do hand-drawn, more cartoony pose-to-pose 2D animation effects. But even in the pose, it was meant to be more of a Miyazaki style than, say, a Disney style of posing. The teams therefore had to deconstruct and relearn their way of doing things.

HR: I just wanted to say that these are the kind of challenges that our team takes on. In fact, they find them quite exciting. And we’ve always approached everything with the “how”: Ok, here’s what we need to do. How are we going to do it? We even had a position on our film, which was “look head”. Jeff Budsberg actually focused on many of our challenges in the look of the film and helped us with the how of it all.

AWN: You recorded a lot of the vocals acting as a whole, rather than individually. How did that dynamic affect the performance, and what do you think it brought to the movie that you might not have gotten if it had been done the traditional way, one at a time?

PP: It’s incredibly organic for the performers just to be together. I mean, that’s what they do on live action sets. And the idea was to try to allow more fluidity in the sequences and in the way they interpret their characters. We couldn’t really get the whole cast together – it was mostly duos and trios. It’s not often done, as you know, because it’s very complex for the editorial team to separate these takes. But we wanted to do it from the start, and COVID was our saving grace here. With everyone in their own separate rooms, it was easy to have virtual recording sessions where they could interact and overlap.

DR: Sam Rockwell in particular, early on in the process, asked if we could do that. And we were already thinking, “God, we’d like to do this.” I had worked on another project where we read a chart before we started production, and then we basically did a radio version, a story based on the radio play. And you get these kinds of naturalistic, authentic interactions. There are also times when they just riff and go off script. And it’s in those moments that you strike real gold, and the credibility of the scene skyrockets.