These graphic biographies of Freud, Marx and Einstein are on your summer reading list 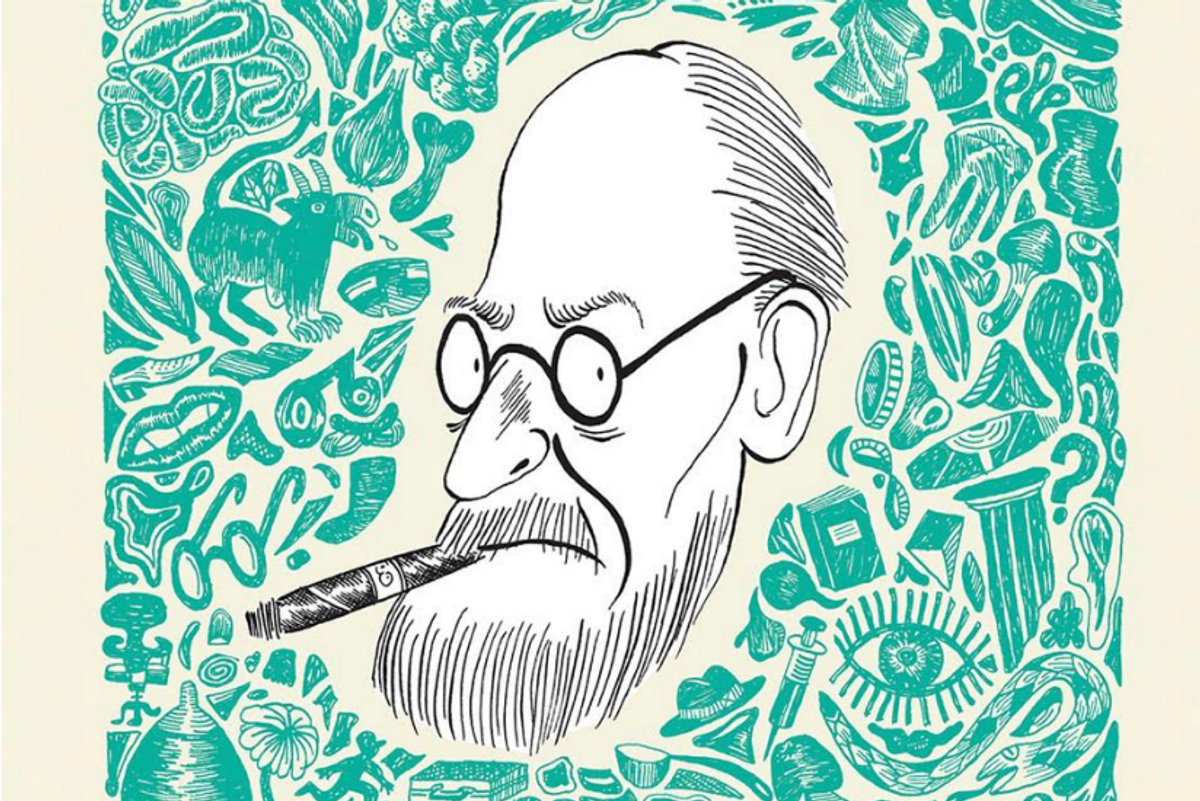 I am completely in love with these funny, thoughtful and beautifully published graphic biographies from NoBrow Press on Sigmund Freud, Karl Marx and Albert Einstein. Written by Belgian psychoanalyst Corinne Maier, illustrated by Parisian cartoonist Anne Simon, the books are thoughtful and surprisingly funny, packing a ton of life into 60 short pages each.

All three are board books the size of a children’s picture book, printed on deliciously thick paper. Originally published in French, each deals with the influence of its main character’s Jewishness on his life and work, and each focuses as much on the protagonist’s personal life as on his intellectual life. They’re written for adults, but comic-loving kids over 12 can enjoy them too (as long as you don’t mind exposing them to clay-footed heroes or pictures of giant phalluses ).

Each also has a different color scheme. Freud was released first, in 2013; its primary hue is green, with orange playing a secondary role. We see little Sigmund’s childhood dreams of being an explorer, and his adult exploration of the brain. (Little yellow brains appear here and there throughout the book.) Humanity’s battle with its aspirations and rudimentary emotions is depicted by Freud himself attempting to kill monsters with a sword. “Reason is a conquest! he is crying. We see women protesting Freud’s ideas about penis envy, marching past his house with a “Freud hates women!” » banner. (Freud, meanwhile, imagines naked women gazing longingly at and stroking a giant phallus.) His most famous cases — Dora, Anna O, The Rat Man — have their own mini-comics. And we see his encounters with celebrities: In England in 1938, after escaping the Nazis, Freud meets Salvador Dali, who tells him that his skull looks like a snail. Freud rolls his eyes, but Simon draws him with a snail on his head for several panels.

The next book in the series is marx, released in 2014. The main color of his comics is, of course, red. There is also a lot of yellow and purple. We read about Marx’s own story of being both rich and poor at different times, noting that “power is organized [sic] by one class to oppress the other” while wanting to pamper his daughters (“nothing is good enough for my little princesses!”). He also fertilizes the good one. The book’s ending is a fantasy, with Marx flying through recent history (the fall of the Berlin Wall, the 2008 financial crisis) in a red Superman cape pinned with a small letter “K”, pondering what the communism and capitalism have forged. There are no easy answers to reassure the reader.

The third volume of Maier and Simon, Einstein, came out a few weeks ago. This is perhaps the least successful, because his attempts to explain Einstein’s theories are no more successful (to me) than any other time anyone has tried to explain the theories of Einstein, but Einstein’s personal story is always fascinating. And her book is mostly purple, my favorite color.

Like Freud, Einstein wanders in the landscape of his own brain. Simon illustrates the theory of special relativity by melting Dali-esque clocks slipping through the warped fabric of spacetime; it shows several Einsteins skateboarding around a Moebius strip to describe the theory of general relativity. Maier isn’t shy about telling us what a selfish schmuck Einstein was to his family: we see him ignoring baby Hans Albert as the baby screams and screams. We find out about his cheating ways. While still married to his brilliant first wife Mileva, we see him whispering sweet nothings to his weak cousin Lily, who soon becomes his second wife. “I know how to take care of you,” she whispers to him. “You are my adorable and exquisite man-child! But he is also seen struggling with the morality of his work. Realizing that his discoveries led to the construction of the atomic bomb, he declares: “it is my greatest regret”. Simon shows him in Mickey Mouse’s sorcerer’s apprentice robe, sadly stirring a cauldron.

All three books are sharp, funny, nuanced, and visually rich. They’re comics, but they’re not cartoonish at all.