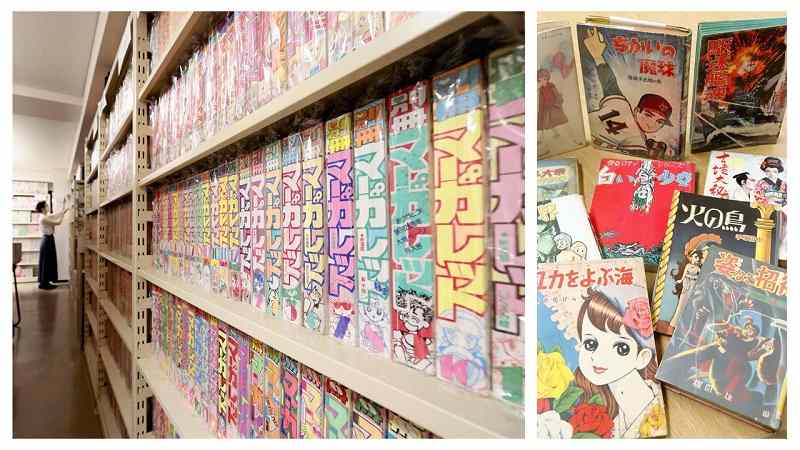 Meiji University’s Yoshihiro Yonezawa Manga and Subculture Memorial Library is located near Jimbocho in Tokyo, a city of used books. One of the largest manga libraries in the country, it houses approximately 410,000 items, including manga magazines and books published after the start of the Showa era (1926-1989), as well as original manuscripts and images. celluloid animation.

Meiji University established the School of Global Japanese Studies in 2008, where students can study manga and anime.

Then, in 2009, the university received a collection of kashi-hon rental books published around the 1950s and 1960s from Toshio Naiki (1937-2012), who was a board member of the Japan Society for Studies in Cartoons and Comics. .

The university also received a separate donation from Yoshihiro Yonezawa (1953-2006), a critic of manga, anime and science fiction related articles as well as fanzines.

Initially, separate libraries were created for each donation, but the university integrated its operations in the spring of last year, allowing visitors to access both collections at one window.

As you enter the showroom, you’ll notice clear acrylic boxes filled with magazines and other materials lining the walls. There’s an issue of the weekly Shukan Shonen Jump, most likely from the 1970s, with “Barefoot Gen”, “The Gutsy Frog”, “Team Astro” and other manga titles on the cover. At the time, the magazine was priced at ¥130.

In the reading room on the second floor, which contains about 4,000 volumes, there are also magazines that are no longer published, such as “Garo”.

Visitors can consult the library’s collection and, on request, read rare publications. They can also hold in their hands the first issue of COM magazine from January 1967, in which Osamu Tezuka’s “Hinotori” (Phoenix) was serialized.

I held this volume which will go down in the history of memorable manga magazines, with the greatest care.

Other weekly magazines like the March 1968 Shukan Shonen Magazine were full of famous titles such as “The Genius Bakabon”, “Gegege no Kitaro”, “Rocky Joe”, and “Star of the Giants”.

You can also check the issues of the weekly Shukan Margaret, which carried “La Rose de Versailles” and “Aim for the Ace”.

“What’s interesting about tracing magazine culture is that we can see who was publishing works at the same time, rivalries and teacher-student relationships between manga artists,” said Emi Misaki, a member of staff.

I felt the effervescence of the manga world and readers of old, still strong long after the creation of these comics.

The library is located on the Surugadai Campus of Meiji University, about a seven-minute walk from JR Ochanomizu Station.

Admission: The exhibition hall on the 1st floor is free. One-day subscription to the 2nd Floor Reading Room for ages 18 and up starts at ¥330 and from ¥110 for those under 18. Free for preschoolers.