What Karl Marx can tell us about Donald Trump 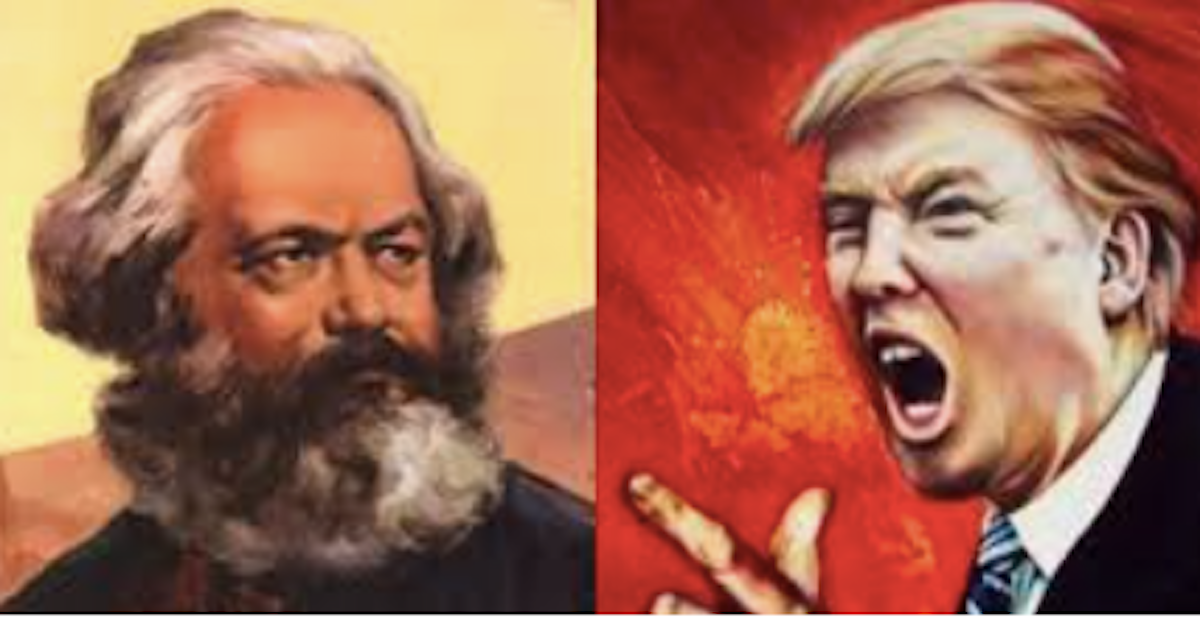 American policy is a farce on the verge of tragedy. Although Donald Trump’s personality has dominated the United States for more than four years, he is not the only force driving the country towards instability. Rather, the main danger comes from the circumstances that allow Trump to flourish. As Karl Marx wrote in Louis Napoleon’s eighteenth brumaire: â€œThe class struggle in France created circumstances and relationships which allowed grotesque mediocrity to play the role of heroes. As in France, so in the United States, the difference being that the comic Louis Napoleon was an intellectual giant compared to Trump, the greatest coward and dunce to have ever been President of the United States.

Marx‘s essay is relevant to contemporary America because it describes the dashed hopes of the 1848 revolution and how ghosts of the past haunt politics. He begins with the famous comment: â€œHegel notices somewhere that all the great facts and figures of world history appear, so to speak, twice. He forgot to add: the first time as a tragedy, the second time as a farce.

In America today, the circumstances are a weak political system, the farce is Trump’s attempt to take military control of Washington, DC in June, and the tragedy is what will follow the November 3 election.

In France, in 1848, the revolutionary spark was the ban on subversive restaurant-clubs. In America in 2020, it was the public torture and murder of George Floyd by the Minneapolis police. The result has been another of America’s periodic crises over racial oppression. Every few years America recognizes the persistence of its original sin of racism. Every few years America realizes that original sin means you continue to sin. The ghosts of past crises lead Americans to proclaim that “this time” is different. Each time there is considerable progress, notable slippages, and then Americans wonder why they cannot overcome this sin. Each crisis of racism is like one of France’s many revolutions, a burst of energy that never lives up to expectations.

What was different about the occasion was that some 15-26 million people demonstrated against racism in the weeks following Floyd’s death on May 25. After the first marches and riots, the protests turned into a lingering wave of rallies and vigils. In some cases, small groups of people stood by the side of the road with signs. Those who marched were often not political, and they had not previously been very concerned about racism. Much of the American political class has failed to grasp the importance of this phenomenon. Many politicians only understand electoral mobilization and campaign contributions. People on the streets, wielding power in a raw form and without mediation, scare them.

One of the few who understood the challenge was Trump. He recognizes that the anti-racist movement rejects what it stands for. At the heart of Trumpism is nostalgia for a bygone era in which the â€œwhite working classâ€ supposedly occupied a respected position in society, a time when minorities in America were â€œsufferingâ€ and apparently knew their place.

Trump wanted 10,000 troops to crush protests in Washington, DC in early June. Attorney General Bill Barr assembled a militia from various federal agencies to provide this show of force after the Pentagon dragged its feet. No former US president has sought to invade the nation’s capital.

While their matchless uniforms make them look comical, the Federal henchmen were a grim presence. Few wore badges or identification, a ploy to evade responsibility. It was clear that if ordered, they would attack protesters with the same zeal that customs and border protection had enforced Trump’s Muslim ban in January 2017. Worse, there is not a single documented case. of a federal agent refusing orders to deploy to the streets of Washington, DC So much for American exceptionalism.

The ghosts that inspire Trump are the strong men and dictators he admires. Trump hailed the removal of democracy activists from Tiananmen Square as demonstrating “the power of force.” In early June, he asked if tanks would be available for his imaginary counterrevolution. Trump wanted bloodshed. Instead, he had to settle for cleaning Lafayette Square with chemical irritants.

Despite his best efforts, Trump’s first offer for a military takeover turned into a farce. There was no uprising of imaginary bands of leftist agitators to be crushed by the Federal militia. Sowing the seeds for later clashes, Barr sent the Federal Militia northwest, where it engaged in scrimmages around Federal buildings, confronted the Portland â€œMomsâ€, and then beat a second ignominious retreat.

Every army, even a federal militia, needs followers of the camp. Fortunately for Trump’s federal henchmen, the Republican Party was available, encouraging the prospect of state violence. Senator Tom Cotton (R-AK) even applied to be the next Trump with his editorial in the New York Times. In a scathing insult to the millions of people who had marched against racism, Cotton compared crushing them with the military to the use of troops against segregationists in the 1950s and 1960s.

Such Republican support for Trump’s thirst for violence is a consequence of his belief that voter suppression is acceptable. Trump’s white nationalist hysteria is consistent with how Republicans have exploited â€œwhiteâ€ anxieties for decades. Any attack on democracy, such as the minority regime, is now justified because Republicans fear losing the political power and social privilege they consider their birthright. They assume that politics should appease white anger, which they believe is legitimate, and should suppress black anger, which they see as dangerous and radical.

In contrast, the Democrats could only pull the sidelines. They didn’t know how to resist Trump’s military maneuvers. Not a single Democratic leader understood the political symbolism of Trump’s deployment of federal militia to the streets of Washington, DC When tanks appeared in Moscow in 1991, Yeltsin rode one. Instead of appearing with protesters clashing with the federal militia near the White House, Congressional Democrats responded with letters and the threat of legislation.

Perhaps the biggest joke was that the only effective institutional resistance to Trump came from the Pentagon. The Defense Department was prepared to move troops near Washington, DC to appease the president, but not to put them on the streets. Chairman of the Joint Chiefs of Staff apologized for being seen near Trump in uniform after the Lafayette Square cleanup. The Pentagon later objected that the federal henchmen in Portland looked like soldiers.

The problem now is not the election, which Trump is trying to steal, but its consequences. Winner or loser, Trump bequeaths America an authoritarian and racist movement that despises democracy and supports sending American soldiers to kill American citizens. Trump may be a man’s and a president’s joke, but when so many Americans despise their own political system, the result will be a tragedy.

â€”Andrew Apostolou is a British historian.